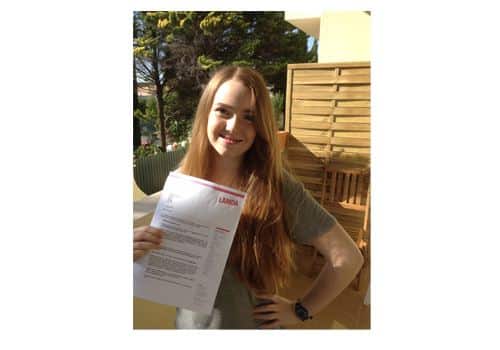 Drama || The Algarveans Experimental Theatre Group has a track record of seeing its younger members going onto study Drama and Arts programmes, so when 18-year-old Orla Ferrie announced she had won a place at the prestigious LAMDA Drama School in London, members of the group were delighted but not really surprised.
Melanie Winstanley, the chairperson of the Algarveans, told us: “Orla has been involved in a number of our recent productions including lead roles as ‘Gladys’ in “Poor Old Uncle George” and ‘Mary’ in last autumn’s production of “How The Other Half Loves”. She also appeared in two pantomimes and was assistant director on “Robin Hood” this year. I have to say none of us were surprised, as from the moment she appeared in our 2011 production of “Honk! The Musical” we all thought a star was born.”
Orla was spotted when she attended an Audition Techniques course at LAMDA earlier this year and she was asked to join their one-year Drama Foundation course by the Drama School.
Orla said: “I hope this course leads me onto studying on the LAMDA three-year drama degree programme as quite a few foundation year students are asked to audition, although competition will be tough as 4,000 apply each year for not many places.”
The Algarve group’s only disappointment is that she won’t be able to be involved in any of its productions in the near future, including this November’s show “Going Dutch” by John Godber, which will be performed at Lagoa Auditorium from November 27 to 29. This adult comedy is by the author who wrote modern comedy classics such as “Up ‘N’ Under” and “Bouncers”.
Further information about the show will be available soon.