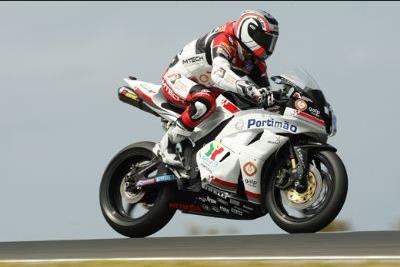 Faro-born reigning Portuguese men’s tennis champion Rui Machado has rejoined the chase for world ranking points which saw him rise over 500 places in 2008.

The 24-year-old became only the fifth player ever from this country to win an ATP Challenger event in Morocco last weekend, beating much higher placed players such as Australia’s Peter Luczak and Alessio di Mauro from Italy on the way to final success over Spaniard David Marrero. The 75 ATP points awarded for the Meknes title not only see Machado hovering just outside the top 100 but also more than make up for those gained during his phenomenal March 2008 winning streak in lower tier Futures.

Meanwhile Lagoa’s European junior badminton No1 Pedro Martins easily defeated four successive players at the Dutch Open before narrowly missing out 21-9, 15-21, 17-21 to Malaysia’s Iskandar Zulkarnian Zainuddin in the final. The young Algarvean is next in action at the German Open this weekend, taking on local player Niclas Lohau in the first round.

Almost equally impressive as the two racket sport players from the region on the international stage was the Parkalgar Honda racing team on its seasonal Supersport debut in Australia. Following promising free training and qualifying sessions on Phillip Island near Melbourne, the new Algarve Motor Park-based duo of Eugene Laverty and Miguel Praia attacked the race proper with gusto, the first-named Northern Irishman only loosing the lead on the last lap to finish a highly commendable fifth, a mere second behind the powerful Ten Kate pair of Kenan Sofuoglu and Andrew Pitt.

Unfortunately, Praia’s race ended with a hairpin bend crash on lap three, but the fact that the Albufeira rider had been the fastest man on the track up to that point promises much better to come in Qatar next weekend.

Last but not least, CG Vilamoura’s Jose Joia made the provisional cut at the Spanish International Amateur Golf Championships in Seville before failing to progress, while the best surfer the Algarve has ever produced, Marlon Lipke, was forced into a surf-off after the first round of the Quicksilver Pro on Australia’s Gold Coast.