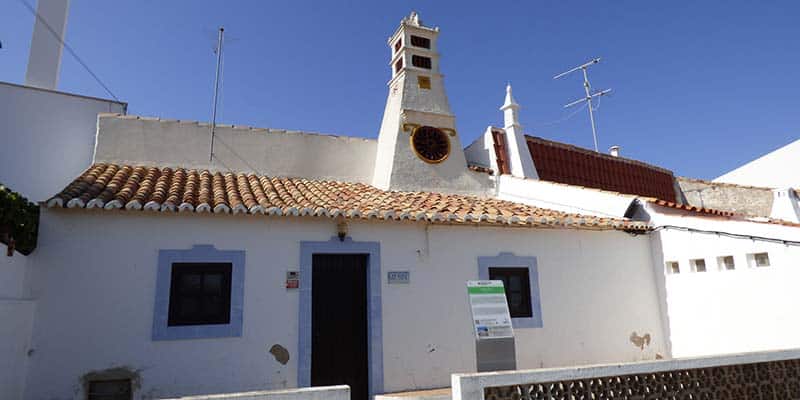 Following on from my article last month on the beautiful azulejo tile façades that are part of Portugal’s architecture, I have been learning about two unique features of traditional Algarvean houses.

I love what I call the “little houses with one door and two windows” so typical of the Algarve. Traditionally painted white with coloured borders around the doors and windows, it is usually on these houses that amazingly ornate chimneys can be seen, resembling Arabic minarets, a reminder of the Arabic influence in the region – although, for the record, Arabs did not build chimneys as these first appeared in the 19th century, long after the Arabs had left!

Did you know that, originally, each chimney was different? Specialised stone masons would ask the house owners “How many days of chimney do you want?” – because the more detailed and expensive chimneys were a demonstration of the property owner’s wealth and of the mason’s artistic skills.

Designs range from simple to elaborate (round, square, prism, balloon) with lace-like tracery grills and topped with cones, crowns and spires. Whilst modern houses still feature typical chimney designs, these are now mass-produced and it is hard nowadays to find anyone skilled enough to build an original chimney.

Even the most unassuming house could have a far too big and ostentatious chimney as can be seen on two in the village of Porches that clearly reflect the owners’ exhibition of grandiosity. One dated 1793 is situated in the aptly named Rua da Chaminé. The other is in Rua José Carapeto, on a small house which belongs to the local church and which has been the subject of controversy in recent years as locals have objected to the redevelopment and possible destruction of the site.

Sadly, like other traditional architectural features, old chimneys are being lost as houses are knocked down to make way for modern housing. Thankfully, however, there are some individuals trying to preserve the memory of this Algarvean heritage.

Abel da Silva, a semi-retired civil engineer, has been photographing Algarvean chimneys for 22 years having first taken an interest in them when, for work reasons, he had to commute daily from his home in Albufeira to Tavira and he saw large chimneys on ruins along his route.

As his engineering work took him all over the Algarve, this interest soon became a hobby and, to date, Abel has photographed and catalogued over 1,700 chimneys.

Using ordinance survey maps (1:25000) which indicate the location of ruins, Abel then checks on Google Earth to see if these have chimneys. If a chimney is visible, Abel visits the site to take photographs, record the location and any dates or letters, as many property owners put their initials on their chimneys.

Abel told me that “what was an interest, became a hobby, became a passion and is now a mission. My mission is to try to preserve, through a photographic record, this disappearing Algarvean patrimony which currently does not have any official body interested in its preservation. There is one chimney located in São Marcos da Serra that is classified as being of municipal interest, but local councils do not have an official plan for the recording or preservation of traditional chimneys.”

Abel has had a few exhibitions of his photographic work and, in 2012, he created a Facebook page called “Chaminés Algarvias – Uma Espécie em Vias de Extinção” (Algarvean chimneys – A species en route to extinction) where individuals can post photographs of chimneys. There are hundreds of photos on his page, which has 3,594 members!

The variety and range of chimneys is incredible. Despite living here for 20 years, I had never particularly noticed chimneys but now recognise them to be a unique art form which is slowly being destroyed. My drive back from my interview with Abel was rather precarious as I could not avoid looking at all the chimneys along the roads!

Abel loves the fact that no two chimneys are the same and with so many ornate examples, his favourite is rather surprising due to its simplicity. He hopes to publish a book about the history of the Algarvean chimney with photographs for those for which he can tell the individual chimney’s story.

His dream for the future is that the ministries of culture and tourism take an interest in preserving the Algarvean chimneys and that they could be classified as part of UNESCO’s list of World’s Intangible Cultural Heritage, which is awarded to traditions and skills passed on within cultures.

Happily, Abel is not alone in his quest. Portimão photographer Filipe da Palma has, for over 20 years, been dedicated to photographing traditional Algarvean architectural features which are being destroyed and ignored by the government bodies that could do more to protect them from relentless urban development.

It was after living in Lisbon, when Filipe returned to his home town, that he immediately began to photograph the rapidly disappearing Algarve of his childhood.

He has a particular interest in photographing ‘platibandas’, the horizontal decorative freeze bands at the top of house façades which are usually brightly painted and have moldings or tiles that create artistic patterns.

Like the chimneys, platibandas are unique in their designs and first appeared in the 19th century. Filipe has had many photographic exhibitions where he aims to show the viewer that the Algarve has more to offer than just beaches. He is a strong advocate for the preservation of Algarve traditional architecture and like Abel he is on a mission to create a record of these disappearing features.

With the advent of digital cameras, both Abel and Filipe returned to some of the original houses they had photographed analogically, only to find them gone and both feel that they are racing against time to photograph those that remain.

So, the next time you are walking in the Algarve, look out for chimneys and platibandas and maybe even take a photograph to help preserve a little more of our disappearing, unique and beautiful Algarvean architecture.