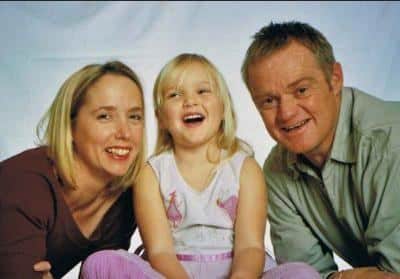 British resident Touchelle Smyth is to run the Lisbon half marathon on March 22 to raise funds to pay for a life-saving kidney transplant for her husband Rod.

Touchelle, 39, and Rod, 48, have lived in the Algarve for more than 20 years, having set up Tom and Jerrie’s Diner in Albufeira.

Having suffered with diabetes since childhood, Rod was diagnosed with kidney failure 10 years ago, one month after the birth of his daughter Phoebe, and has been on a transplant waiting list ever since.

Touchelle told the Algarve Resident: “Every day that passes reduces Rod’s options and chances of finally getting the kidney he desperately needs and has waited for, for 10 years.

“Rod has been taken off the transplant waiting list in Portugal because of his heart condition, having suffered a stroke five years ago and undergone a triple bypass, but he is able to go on a waiting list for a transplant in the UK.”

Another option is for Touchelle to join a kidney pool, a scheme available in the UK  whereby she can donate a kidney to a third party and either they or a fourth party would donate a compatible kidney to Rod.

Both options, however, mean that Rod would have to live in the UK for several months after the surgery to ensure that the new organ was not rejected by the body.

“I woke up at 3am and decided to run the Lisbon half marathon to raise funds to help pay for the expenses of Rod’s operation and recovery in the UK,” she said.

As part of the fundraising, Touchelle has set up a website with information about Rod, how to donate funds and the pledges received to date.

“We are not a registered charity. It is a private fundraising appeal but we have set up a separate bank account and a PayPal option for donations,” said Touchelle.

Any money not used will be donated to charities both in Portugal and the UK to help save someone else in the same situation.

“Rod’s great passion is Liverpool Football Club and Formula One. He has threatened Phoebe that one day he will take her to see these events. Let’s help him to achieve this dream,” she said.

For more information or to make a donation, please visit the website at www.run4rod.com. Alternatively, contact Touchelle on 919 910 139 or email rtpsmyth@hotmail.com.