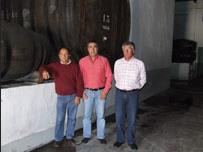 TWO main wineries in the Algarve, the Lagoa and Lagos cooperatives, are joining forces to create the new Adega Cooperativa do Algarve, or Algarve Wine Cooperative. José Pina, president of the Lagoa Wine Cooperative, spoke to The Resident about the business strategy being developed by the two wineries.

The agreement to merge the two wineries was signed two weeks ago, following a visit to the region from the Minister of Agriculture, Jaime Silva.

However, the legal procedures to formalise the new Algarve Wine Cooperative were only discussed this week at a meeting in Lisbon. This was attended by representatives from Lagos and Lagoa wineries, the Ministry of Agriculture and legal advisers from the Instituto António Sérgio do Sector Cooperativo, a state owned entity dedicated to developing the cooperative sector.

José Pina, who was appointed president of the Lagoa Wine Cooperative a year ago, told The Resident that the main purpose of the merger was to concentrate the production of wine under one umbrella and improve the wine quality in the region and marketing strategies for local producers.

“It is not our intention to stop the production of Lagoa or Lagos wines, as they are the only two cooperatives in the region. What we want is to add the Algarve wine brand to the list of quality wines in the national market,” said Mr Pina.

The agreement, he added: “includes the upgrade of the methods and techniques used by local wine producers at their vineyards, and also the modernisation of wine production in the cellar complemented by innovative management”.

Legal procedures for the new Algarve Wine Cooperative need to be completed before the end of this year so that the plans for the new facilities can be approved and its construction started at the beginning of 2009.

The Ministry of Agriculture is expected to finance 50 per cent of the project, with the remaining investment coming from the new entity to be formed.

“This calculation is based on the wine production at the two wineries in the last four years”, he explained, adding that, together, Lagoa and Lagos produce an estimated three million litres of wine per year.

The architectural project for the new Algarve Wine Cooperative has not been started but Mr Pina revealed that the new facilities will be located on a plot of land which has been conceded by the Ministry of Agriculture. The new premises, to be constructed near Sesmarias in the Lagoa council, will occupy an area that is “much larger” than the existing facilities in Lagoa.

According to the president of the Lagoa Wine Cooperative, the new winery is expected to play a strong role in the region’s tourist offer. The construction of a wine museum at the premises is in the plans and Mr Pina hopes it will help “to tell the history of the Algarve’s wine production”.

Wine tasting sessions will also be organised and a restaurant is being considered to be included in the plans, so that the wines produced by the future Algarve Wine Cooperative can be tasted with food by visitors.

Anticipating the summer season, two new Rosé wines are to be launched by the Lagoa winery in the next

The launch has been kept a secret but José Pina, president of the Lagoa

Wine Cooperative, told The Resident that the moment has come to put the new Rosé wine on the market “as it is an excellent product for the summer”.

After a five-year absence, Lagoa winery participated  in the Wine Masters Challenge 2008 with three of their wines.

All the wines were sampled in blind tastings and received prestigious awards at the international competition which was held in Estoril on March 27.