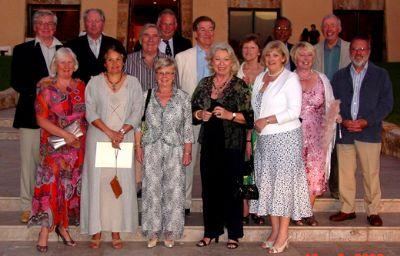 More than 70 members of the Algarve Wine Society (AWS) were given the opportunity to learn about the wines of The Douro Boys during a tasting, followed by a gourmet dinner, at Vila Monte in Moncarapacho on Friday, April 24.

The Douro Boys are a group of winery owners from northern Portugal who have joined together with that name to promote their wines.

Following a reception at the Orangerie Restaurant at Vila Monte, members of the AWS were given a PowerPoint presentation by each member of The Douro Boys team, with a tasting of 11 wines.

Meanwhile, 16 members of the AWS visited Chile and Argentina between March 10 and 20 on an excursion of discovery organised by the society’s President Erla Walther with the help of Ampora Wine Tours.

The group used Santiago, Chile, as their base, from which they explored 11 wineries. The group spent its final evening at a gala farewell dinner at the Bodega Catena Zapata, a winery in Argentina built to resemble a Mayan pyramid.

The next event on the society’s calendar is a tasting of Fiuza and Bright Ribatejo wines on May 28 and a golf outing, followed by the traditional summer party on June 28.