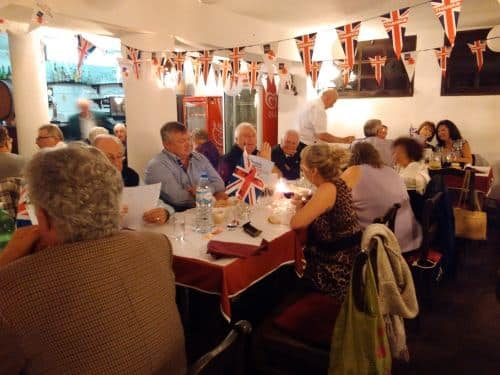 More than 100 members and guests of the Algarve Wine Society attended the annual gala dinner dance and AGM held at Vila Vita Parc in Porches on February 19.

The AGM was convened by the Vice President Anthony Pattison, with Erla Walther summarising the 13 events which took place during 2010, including wine tastings, the traditional summer party, Christmas lunch and trips to Galicia, Piemonte and a local cork factory.

Already the society has plans for 11 events to take place during 2011 with the next a tasting of the Alentejo wines of Santa Vitoria on March 16, and a Swiss style gourmet dinner at the Jardim do Vale Restaurant in Almancil on April 15.

Secretary Larry Hampton spoke of the 222 fully paid up members of the society and announced that 19 new ones had joined since the start of the year.

It was then the turn of treasurer, David Grindley, to give his report of the year in which he declared the financial situation of the society to be “healthy”, while Edwin Bisset, president of the fiscal council, assured that the society’s books were in order.

Finally, the bi-annual election of officers completed the official business of the meeting with Michael Savage elected President and Clive Viney Vice President of the General Assembly.

As regards the Management Committee, the retiring officers Erla Walther and Ken Kempson were replaced by Nigel Adams and Elsbeth Graf. The new President designate will be Anne Green, to be confirmed at the next Management Committee meeting, while all other officers of the Society’s three governing bodies remain in place for a new two-year term.

Before Anthony Pattison brought the meeting to a close, Michael Berger thanked Erla Walther, retiring after five years of service as President and, as a token of the Society’s appreciation for her efforts, presented her with a framed lithograph of Porto.

Members were then able to enjoy a five course dinner including a sautéed scallop dish and wines from the Alentejo followed by entertainment by Karen Love and Ian Carfrae.

The Algarve Wine Society’s membership is at its upper limit, however for further information please email hampton@mail.telepac.pt