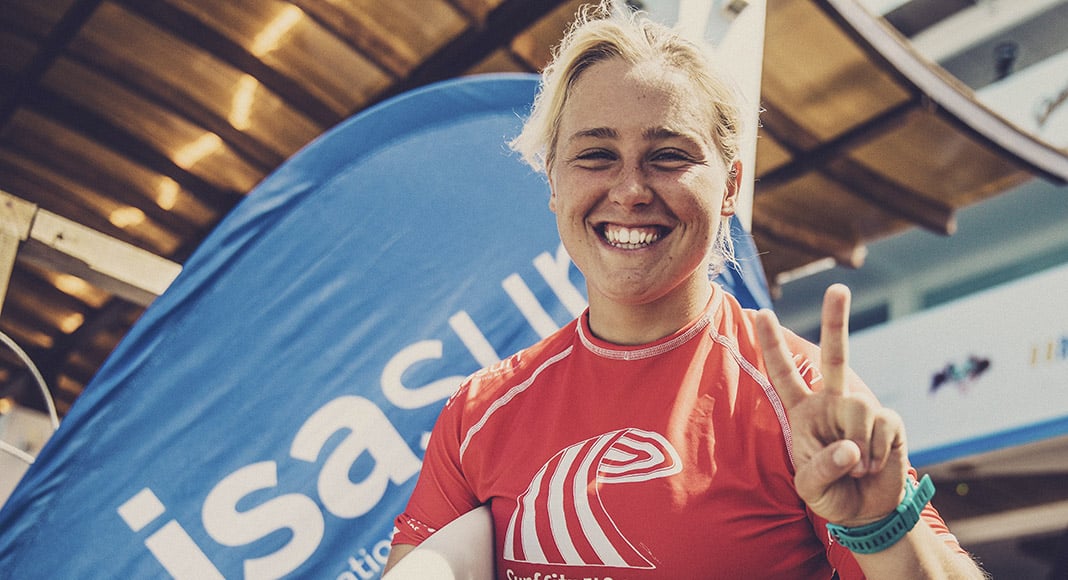 Although she is known in the surfing world as Hopkins, 23-year-old Yolanda Hopkins Sequeira is a true Algarvian, from Quarteira. She is the daughter of a British mother and Portuguese father, was born in Faro and has always lived in Portugal. She competes for Clube Naval de Portimão.

This month, she finished second in the ISA World Surfing Games held in El Salvador, grabbing one of the final seven women’s berths in what will be the first-ever Olympic surfing competition. She also set a new world record for a wave with an almost perfect score of 9.6 out of 10.

Given that Portugal is a country where sponsorship for high-level athletes is a chronic issue, Barlavento newspaper spoke to Yolanda this week to learn more about the sacrifices she has to make and why she dubs herself the “poorest surfer in the world circuit”.

Her love of sports developed at an early age. When she was just eight, she was already playing football for Quarteirense as well as playing tennis and swimming.

As she excelled at Physical Education at school, her PE teacher, who was developing a project to create the first surf school in Loulé, invited her to join.

“I had never heard of surf before. But it was in the sea which I always enjoyed, I was a good swimmer and so I excitedly tried it. But they put me on a bodyboard and, after two waves, I didn’t like it. It wasn’t what I wanted,” she said.

“I threw the board to the side and swam over to where the surfing lessons were taking place. I went over to the teacher and said, ‘this is the board I want’.

“He told me to lie down on the board, he pushed it and I was able to get on my feet right away. It was the best feeling in the world! I’ve done a lot of sports, I was always very sporty, but as soon as I got up on a board, I felt that’s what I wanted to do.”

“Ever since I was very young, I’ve heard of people who made surf their life and I wanted to do that. I’ve worked hard for it because I can’t imagine doing anything other than surf,” she said, stressing however that her path has not been easy.

One of her biggest sacrifices was leaving the Algarve to train at the Pig Dog Surf Camp in São Torpes, Sines, where her coach John and his wife Mónica have become her second family.

She has lived there for four years in between competitions, which take her all over the world. While she rarely has the chance to see her parents, São Torpes has the kind of waves that can help her prepare for the major competitions.

Financially, she believes she is the “poorest professional surfer in the world”.

“Even though I’m the world vice-champion and I qualified for the Olympics, no one has come up to me and given me a sponsorship and told me to ‘do this for a living’. I have the ‘sponsorship’ of my mother and the Pig Dog family, whom I will never be able to repay what they have done for me,” she said.

This lack of resources means Yolanda has to cherry-pick the tournaments she takes part in to ensure she spends the least money possible. Taking part in a single tournament can cost up to €45,000, and her lack of funding often means she competes under “great stress” to achieve the spot she needs to make enough money to compete in the next tournament.

“It is very exhausting. This year was less of a burden, which helped me achieve better results. But I need a good sponsorship to completely blossom,” she said.

At the end of 2019, Yolanda had reached the eighth spot of the world ranking. But at the start of 2020, she had some less than stellar performances in competitions in Australia and fell to 26th.

“I was able to overcome the issues and was in great form, getting ready to improve in New Zealand when the Covid-19 pandemic suspended all competitions. But I have been able to recover and am now number two in the world. However, I still don’t have money,” she said.

Getting to where she is now is also no easy feat. As she admits, “most people think I’m crazy, but my day-to-day life is jam-packed.

This routine takes a toll on her social life, but it is a sacrifice she believes she has to make.

“The way to become the best is dedication and giving up certain things you don’t want to give up. Many people don’t, and that is why they don’t get there. One of the most important things for all of us, I believe, is to spend time with friends and family and obviously have a companion. I’ve given all that up. For example, I see my nephew, who is now turning five, three times a year. Each time I see him, he has grown. But until I reach the top, I won’t do anything else apart from breathing surf.”