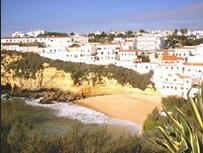 A NEW report recently published by the Instituto Nacional de Estatística, the national statistics office, has confirmed that the Portuguese continue to choose the Algarve as their preferred holiday destination.

In 2005, more than 30 per cent of the 2.8 million Portuguese who go on holiday during the months of July, August and September choose the Algarve as their preferred place in the sun. According to the data, the Algarve region is the favourite destination for national tourists, followed by central Portugal (27.3 per cent) and northern Portugal (13.3 per cent), with only 450,000 Portuguese preferring to spend their holidays abroad (12.7 per cent).

Holidays were the main reason for travel in the third quarter of 2005, representing 63.5 per cent of the 4.5 million trips taken. Travel undertaken between the months of July and September of last year – more than half of which took place in August – represented a growth of 1.1 per cent when compared to the same period in 2004.

The report concluded that, on average, the Portuguese tourist spends 32.90 euros a day while on holiday, with the highest daily expense relating to professionals travelling on business (40.90 euros per day).

With regard to organising holidays, 47.5 per cent took place without any prior booking, 43.8 per cent were the result of a direct booking by the traveller and only 8.7 per cent were organised through a travel agent or tour operator.