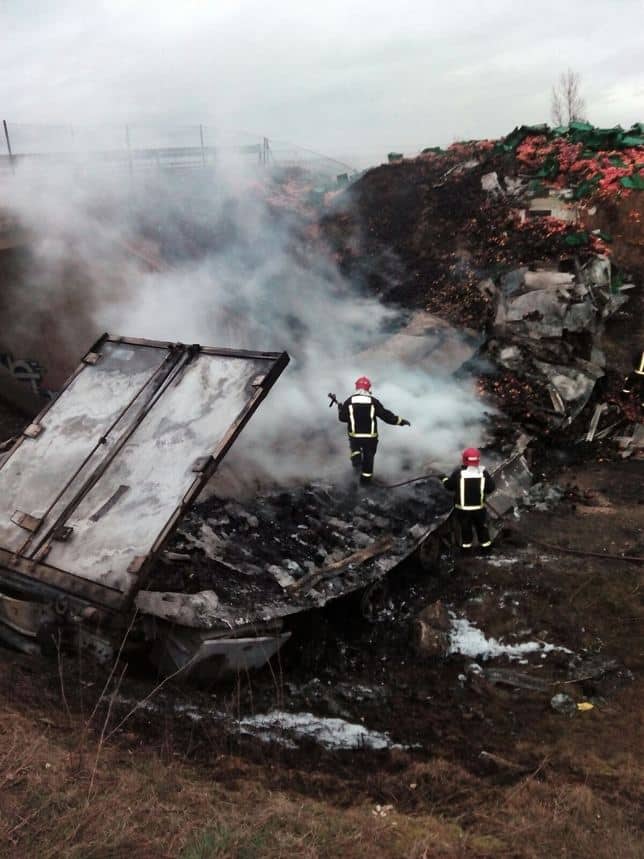 Two Algarve truckies died in a horrific accident that saw their vehicle engulfed by flames after it careered off a Spanish motorway at 5.30 on Sunday morning.

The men have been identified as 38-year-old Agostinho Carvalhosa, from Albufeira, and 49-year-old José Vieira from Portimão.

Their accident took place just hours before a minibus from Portugal crashed in France, injuring two Portuguese passengers, one of them seriously.

The men were working for Spanish transport company Primafrio and had been on their way to deliver Portuguese oranges.

It is believed the men fell asleep while driving on the AP-1 near Briviesca, the fire commander from nearby town Burgos told Jornal de Notícias.

This is simply an instant hypothesis; however, as the truck was completely destroyed by fire by the time rescue workers arrived at the scene.

According to Spanish media, the road was closed for almost eight hours as clean-up operations ensued.

JN writes that Carvalhosa had been living in Ferreiras, Albufeira for several years, but came from Ponta da Lima, while Vieira used to be a fireman in Portimão.

José Luís Carneiro, Secretary of State for Portuguese Communities Abroad, said the government has already sent its condolences to the men’s families.

He added that the government is also following the accident in France which happened near Gironde, Bordeaux.

The minibus, believed to have set off from Viseu, was carrying eight Portuguese people on their way to Belgium.

Only two passengers were hurt. One had to undergo surgery due to facial trauma but is already out of intensive care, said Carneiro.

Why the bus crashed remains unclear. French media has suggested the driver “lost control” but this will have to be confirmed by an investigation.