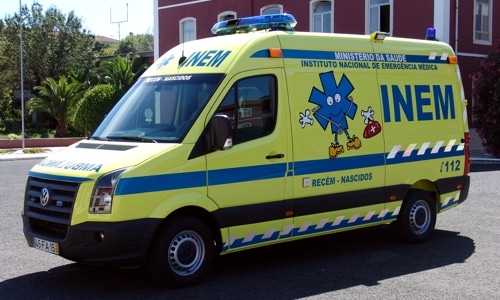 The Algarve region has ‘lost the only pediatric ambulance it possesses’.

Saudeonline (health website) reports that the ambulance had been out of service since last Monday, and is likely to remain so until the end of next week.

At a time when hospitals elsewhere are marked by doctor shortages, or situations where doctors say staffing levels are so low they cannot assure adequate response to patients’ needs (see below), the Algarve is suffering a deficit of ‘available pediatricians’.

CHUA – the Centre for Algarve hospitals – stresses this doesn’t mean children cannot be transported when necessary, just that transport will be carried out by ‘other ambulances’.

Saudeonline counters however that “the other vehicles do not have equipment necessary to assist babies or newborns in a critical condition”.

This is not the first time the region’s one and only children’s ambulance has been ‘off the road’.

“The same thing happened at the end of last year, and during the summer this year”, says saudeonline – concluding “the lack of doctors is ‘transversal’ (across the board) in many of CHUA’s specialities where there is a constant shortage of doctors to fill vacancies, particularly pediatricians, urologists and ophthalmologists.

During the recent ‘long weekend’ (taking in the November 1 Bank Holiday) “with more people visiting the region, several specialities did not have one specialist doctor available”.

Doctors at Lisbon A&E ask to be ‘excused from responsibility’

With constant hiccups at the pediatric unit of Lisbon’s Garcia da Orta hospital, doctors working in the capital’s largest hospital – Santa Maria – have “refused to assume responsibilities over assistance for patients due to lack of personnel”.

A group of 21 heads of department at CHULN (the Lisbon north university hospital centre) sounded the alert late last week that medical teams at the centre’s only A&E department (at Santa Maria) “do not even comply with minimum levels recommended by the College of the Speciality of Internal Medicine”, particularly when it comes to the periods 8pm to 8am, and 24-hour cover over weekends and Bank Holidays.

As a result, the doctors “refuse to assume responsibilities for accidents or incidents” that may happen due to the “deficient and anomalous conditions”.

Health minister Marta Temida has responded, telling journalists that the request ‘to be excused responsibility’ must be seen as a “sign of alert”.

Recognising that the ethics of the medical profession involve “guaranteeing that everything will be done to ensure there is no risk to any patient”, she said: “It is important to understand when these alerts are sounded that we, with the health professionals, seek to find a way to overcome the constraints”.

The minister maintains that in this latest situation that is precisely what is happening.