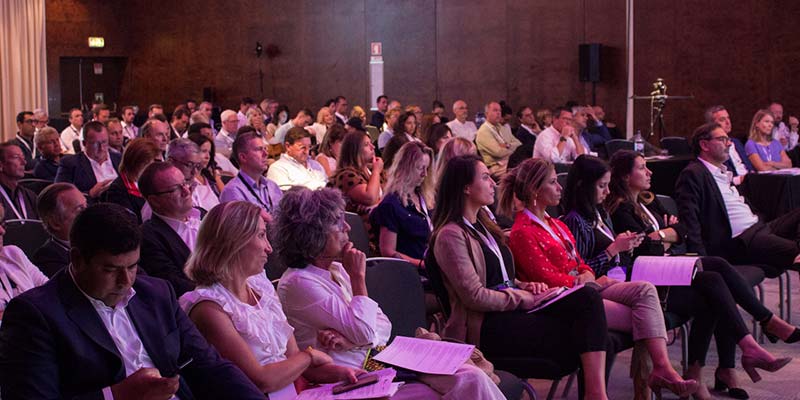 With the Algarve already established as one of the main tourism destinations in Europe, if not the world, the region is now exploring ways to evolve from the traditional ‘sun and sea’ holiday package. Sustainable tourism and the booming ‘health and wellness’ segment could be the way to go.

This was the opinion of several experts who converged in the Algarve for two major tourism conferences.

‘Encontros BPI Empresas’ brought together over 120 entrepreneurs at the Pestana Vila Sol in Vilamoura on Thursday, September 26, while the Algarve Tourism Conference came a day after at the Hilton Vilamoura and was attended by a panel of specialists, including Algarve tourism boss João Fernandes.

Visited every year by millions of people, the Algarve remains one of the world’s most popular destinations for sun-seekers. Having been named Europe’s ‘Leading Beach Destination’ countless times at the World Travel Awards, the region hardly has any room left to grow in this niche.

But this is not the case outside of the busy summer season. In fact, experts at both events stressed that the Algarve still has a lot of “untapped potential”, and sustainable tourism and the ‘health and wellness’ segment could be the answer.

At the Algarve Tourism Conference, speakers said that the Algarve has “the perfect environment to test solutions for major challenges ahead – including energy use, water shortages, greenhouse gas emissions, and the destruction of natural habitats, ecosystems and wildlife”.

Co-organiser of the conference and tourism development consultant, Andrew Coutts, said the region is also “set to capitalise on the rapidly expanding wellness tourism market” – expected to surpass €900 billion by 2022 – and that “more can be done to build on existing world-class facilities and assets so the location can reinvent its global brand”.

As he pointed out: “It remains abundantly clear that the Algarve still has a great deal of untapped potential. The region is recognised for its peace, tranquillity and safety, but less well known for its vibrant business scene” in the areas of healthcare, wellbeing, senior living, technology and renewable energy.

“It’s a very strong mix which lends itself to the creation of a true circular economy.”

Announced at the event was the launch of Revive Clinic, an Algarve clinic that will treat people suffering from Lyme disease, an infectious disease caused by the Borrelia bacterium which is spread by ticks.

It is being launched by Dutch lawyer Ieke van Doorn, a Lyme disease patient who is committed to helping people who suffer from the same ailment as she does.

“At the start of this year, I met with a team of doctors and health professionals about the possibility of moving forward with this project. After taking into account some statistics and factors, I quickly decided that I wanted to open my clinic in the Algarve,” van Doorn explained.

The idea will be that people from all over Europe will be able to seek treatment at the clinic, which is expected to open by the end of 2019. Further details are being kept under wraps for now.

It is these kinds of projects that experts believe could help boost the Algarve’s tourism sector further.

Coutts continued: “While the conference was hooked to wellness travel, we entered new territory. We now need to look way beyond these shores, as Portugal always has, and learn from other world-class regions with similar qualities. There is no reason why the Algarve cannot become a pioneer in sustainable development with the right private-sector backing and political will and position itself in a serious sense as the California of Europe.”

“While the inspiration for the conference centred on the ‘wellness tourism’ industry, the full day of discussion ultimately covered much more ground,” he said.

“We drilled down into detail but also considered the global position. In that context, we began to see a broader regional strategy taking shape. It is clear the Algarve has world-class features and facilities, but we also need to continue to strengthen them in certain strategic areas such as healthcare, wellness, leisure and sustainability.”

Cabaço added: “We want to attract developers, financiers and operators who are sympathetic to our ideals and can help the Algarve develop a global model for sustainability.”

At the BPI event, held a day before the Algarve Tourism Conference, experts tackled not only the “challenges of sustainable tourism” but also “capturing new markets and combating seasonality”.

Mayor Vítor Aleixo stressed that “resources are finite” and that the Algarve should take this into account when planning its economic growth.

He also spoke enthusiastically about a project that is being developed alongside the councils of Silves and Albufeira which aims to see the Algarve’s interior recognised as a ‘UNESCO Global Geopark’.

The mayor said that nature tourism as well as tourism linked to the Algarve’s cultural and anthropological traditions “can be an important tool for generating wealth” in the Algarve’s inland areas.

Carlos Baía stressed the work that has been carried out in Faro to promote the Algarve as a more “sustainable destination,” highlighting the ongoing task of making sure that the Ria Formosa estuary – considered by many to be a natural treasure – does not become overburdened.

In his speech, Algarve tourism boss João Fernandes tackled seasonality and said that the region has been able to start welcoming more holidaymakers outside of the busy summer season although it must continue “diversifying what it has to offer them”.

Frederico Costa from Pestana stressed the importance of airlines in bringing holidaymakers to the Algarve and said that before exploring new markets, the region should try to attract more tourists from regions in the UK and Germany that may have been overlooked until now.

While these events may have been important to set guidelines for what tourism authorities and companies plan to do in the future, only time will tell if they will actually follow through with the plans.