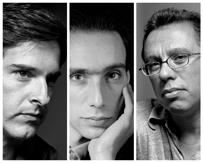 CLASSICAL MUSIC and dance will be performed across the Algarve between April 25 and June 1 by national and international orchestras and ballet groups as part of the FIMA 2008 international Algarve music festival.

This 30th edition of the festival includes 16 concerts and dance performances organised by the Região de Turismo do Algarve (RTA) and the Teatro das Figuras, under the artistic direction of Portuguese maestro Osvaldo Ferreira.

Prague’s Municipal Orchestra is due to perform on May 2 and May 3 at the Teatro das Figuras in Faro and the Centro Cultural de Vila Real de Santo António respectively, both starting at 9.30pm.

An interpretation of Shakespeare’s A Midsummer Night’s Dream is due to be performed by the Belo Horizonte dance company at the Casino de Vilamoura on May 7 from 10pm, again at the Centro Cultural de Lagos on May 9 and the Auditório Municipal de Lagoa on May 11 from 9.30pm.

Pavilhão do Arade in Parchal will be hosting a piano concert by the trio Bernardo Sassett, Mário Laginha and Pedro Burmester on May 16 from 9.30pm. This free concert will feature works composed by the pianists as well as by Bach, Mozart and Barber, among others.

A free violin recital is due to be performed by Yang Liu on May 17 and 18 from 9.30pm at the Teatro Municipal de São Brás de Alportel and in Silves, at a venue yet to be announced.

Works written by Mozart for the piano will be performed by Ricardo Castro and the Algarve Orchestra on May 22 at the Igreja do Carmo de Tavira and on May 23 at the Igreja Matriz de Loulé, both being free to enter and starting from 9.30pm.

A free cello recital by Ivan Monighetti, featuring works written by Bach, will take place on May 24 from 9.30pm and May 25 from 5pm at the Igreja do Imaculado Coração de Maria in Altura, Castro Marim and Igreja Matriz de Aljezur, respectively.

Hector Berlioz’s Fantastic Symphony is due to be performed by the Algarve and Estremadura Orchestras at the Portimão Arena on May 31.

Teatro das Figuras in Faro will be hosting the final performance of the festival by the Estrelas do Ballet de Paris on June 1. These performances are all due to start from 9.30pm.

For more information about the FIMA International Music Festival and to reserve tickets for performances which are not free, please visit the website, available in Portuguese only, at www.fima-2008.com. Alternatively, please telephone the Teatro das Figuras in Faro on 289 888 110.