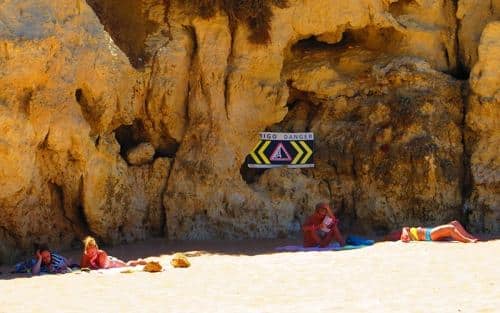 As crowds flock to the beach in perfect summer temperatures, a shocking new list of “beaches at risk” has been published, showing more than 75 separate sites where cliffs could collapse at any minute.
Releasing the list, Portugal’s environment agency APA stresses that despite warnings – and lots of signs – people still continue to park their towels and beach camps dangerously close to overhanging rocks.
“Five years after the cliff fall at Maria Luísa beach in Albufeira – in which five people died and three were injured – the dangers persist … because the areas at risk… continue to be occupied,” APA declares on its homepage.
Thus the authority has come up with a new strategy for trying to keep people ‘safe’. It centres on making certain beaches “limited access” beaches, and increasing fines for any beachgoers who ignore the rules.
Fines run from €30 to €100 – even if people are simply found crossing the forbidden areas on their way somewhere else.
For now, APA has simply listed the danger beaches according to boroughs. Albufeira, for example, is the borough with the highest number of beaches at risk (24), while Lagoa is in second position with 17, followed by Vila do Bispo (11), Portimão (9), Aljezur (7), Lagos (5) and Silves (2).
Elsewhere, beaches with limited access (all well signposted) can be found up and down the country, with even one in Madeira.
Limited access beaches are where the authorities consider the space between high tide and the cliffs poses a danger to people’s lives.
In the Algarve, there are seven in Lagoa, three in Vila do Bispo, two in both Lagos and Albufeira, one each in Portimão and Aljezur – and in Odemira, Zambujeira do Mar (where a French tourist fell and was badly injured recently) there are two.
Further limited access beaches can be found in Cascais, Sintra, Peniche, Mafra, Torres Vedras, Óbidos and Lourinhã.
In other words, as the sun blazes down and the sea beckons, beachgoers are warned: keep your wits about you, and think before you park your towel under a cliff.