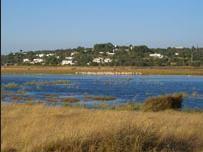 SALGADOS GOLF club has been heavily criticised for artificially draining Salgados lagoon last week, in order to stop its greens from flooding, at a time when hundreds of protected birds are nesting.

The action, which was authorised by the Algarve’s commission for regional development (CCDR), surprised and outraged the Sociedade Portuguesa para o Estudo das Aves (SPEA), an organisation involved in the protection of birdlife in Portugal. The work involved heavy plant cutting a channel through the neighbouring sand dunes to allow water to drain into the sea.

Luis Costa, a spokesman from SPEA, told The Resident that the organisation was not against isolated openings to allow the lagoon to be drained but questioned the

timing. “This should never happen during the nesting period, which starts in March,” he said.

Luis Costa also said he was surprised that the CCDR had authorised the operation, adding: “They have experts who are supposed to know about the fragilities of the lagoon.”

Carlos Cruz, a spokesman for CCDR, told The Resident that the operation “has been monitored” and justified the opening on technical grounds. “The lagoon experienced an odd winter, having stayed connected to the ocean for longer than usual in other years,” he said.

Following the heavy rain of recent weeks, the water level had risen substantially and forced “controlled openings of the canal to drain the excess water and prevent flooding”. This, he said, was also “to avoid putting at risk the wildlife existing there”.

SPEA has been working with the UK’s Royal Society for the Protection of Birds (RSPB) and Almargem, a local association, to count and identify the birds that regularly use the Salgados lagoon.

João Ministro, from Almargem, believes CCDR’s comments “make no sense” and cannot justify the request made by Salgados Golf Club to empty the lagoon.

“The club has water pumps that were frequently used in the past to drain the water,” he said, “and as the lagoon was already in the nesting period they should have used those pumps.”

Salgados Golf Club was contacted but no one was available for a comment by the time The Resident went to press.

However, a member of the club, who asked not to be named, told The Resident that the club had justified the drainage because of the need to “upgrade the sand on the course because of problems with the sewerage”.

According to this member, “they have drained the water many times recently and that has improved the course”. Although the lagoon has been dry for several days, this member was still not convinced that dozens of nests had been destroyed.

The channel was eventually closed on April 18 but it took several attempts by heavy machinery to re-establish the protection of the dunes.

A special place for birds

SALGADOS Lagoon is located between Albufeira and Silves in a depression covering around 1.5 square kilometres.

Isolated by extensive sand dunes that keeps the lagoon separated from the sea and stops the waters of the Espiche stream to escape, the area has a natural way of expelling excess water.

When the water level inside the lagoon reaches the highest point of the dune, a natural channel is opened, releasing the accumulated water.

The sea tides will then work to bring sand back in and close the lagoon in another natural process. Listed among the top 93 wet places in the world, and one of the very few in the Algarve with such characteristics, the Salgados lagoon is protected by a decree (Decreto-Lei n. º 152/97 of June 19, 1997), classifying it as a Zona Sensível, sensitive territory, and a National Ecological Reserve for birds.

The construction of the Salgados golf course on one of the side of the lagoon and a water treatment plant (ETAR) in its north side, to deal with the sewerage systems of the Guia and Pêra parishes, has not helped to preserve the place over the last 20 years.

A special regulation to offer extra protection for the area was never created, despite the efforts of the non-governmental organisations such as SPEA, the RSPB, LPN or Almargem.

The place is home to more than 150 different species from many countries in northern Europe and is used as a haven for nesting and for feeding by many migrating birds.

Plans to demolish the treatment station have already been announced, although this facility is still operating there.

And, despite being equipped with special pumps to extract the excess water, the Salgados Golf Club has regularly opened an artificial channel to prevent the flooding of the greens.

As this procedure must be authorised by the Algarve’s commission for regional development (CCDR), it occurs only until March, when the nesting period starts.

This rule has been broken only once, in 2002, in a similar intervention that destroyed hundreds of nests and triggered the protest of the many environmental organisations.