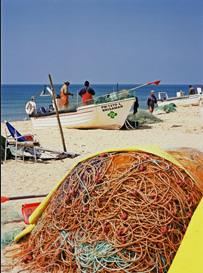 MEN SOLDERED the locks of the gates of Quarteira market during the early hours of Monday (May 2) morning, an illegal act that was resolved by the GNR later that morning.

This was part of the ongoing national fishermen’s protest, which started on Friday (May 30) against successive increases in fuel prices.

The food and economic standards agency ASAE also arrived at Quarteira market that same morning, having been called by local fishermen to inspect fish being sold there, which they claimed had been kept in lorries for more than 15 days.

ASAE confiscated 50kg of illegal Spanish fish and disposed of 30kg of damaged fish from the market.

In the port of Olhão, on Monday afternoon, another Spanish fish lorry left after warnings from Portuguese fishermen, although no other incident occurred.

Also in Olhão, Agriculture Minister Jaime Silva arrived on Sunday to attend a meeting with the hunters’ federation, where he responded to questions from journalists about the fishermen’s strike.

“Two thirds of all fish consumed in Portugal are imported,” said the minister, “but that does not mean that the solution is to import more when there is a strike.”

The Association of Peniche Fishermen (Associação de Armadores de Peniche) has accused the government of not being prepared for the crisis and of having even raised taxes.

President Cavaco Silva called for “greater moderation” on the part of fishermen on Saturday in Coimbra.

Prime Minister José Sócrates also said last week that the government wouldn’t “give in too easily” by freezing fuel prices as António Guterres had done six years ago. “This is not the time to give in to populist and easy measures and wouldn’t be the correct path to follow,” he said.

“The country is in a difficult situation and needs everyone to pull together, including fishermen, in the interests of the country”, added Sócrates.

The national fishermen’s strike was due to end at 4pm on Wednesday, when the fishermen’s associations were expected to analyse a proposal from Jaime Silva, which included the allocation of 40 million euros to the fishing sector and the re-evaluation of the fishing taxes. These measures are subject to the approval of the EU commission.

On a European wide scale, thousands of fishermen from Portugal, Spain, France and Italy were expected to gather in Brussels on Wednesday, protesting against the elevated cost of fuel.