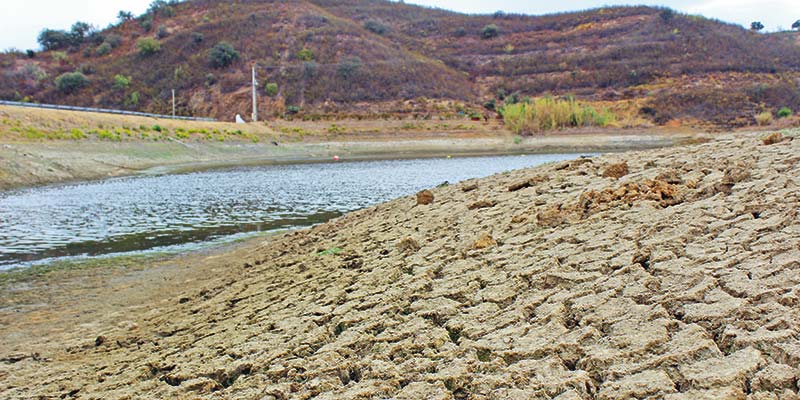 Despite the brief bout of rain in the Algarve last weekend, the region is facing one of its worst droughts in living memory. Dam levels have reached “historic lows”, farmers are desperate for water to save crops and cattle and no amount of rain dancing would appear to reverse the situation.

“I’ve never seen the dam this empty before,” Noémia Romeira, owner of the small café Pérola do Rossio in Odeleite, told the Resident about the Odeleite dam in Castro Marim, which is down to just 27% of its capacity.

Rural communities in the eastern Algarve are among the most affected by the drought, with wells drying up and tanker trucks having to supply locals with water.

The Resident travelled to the borough of Castro Marim last week and visited three dams – Beliche, Corte Pequena (cover picture) and Odeleite – all of which were well below their usual levels.

In these areas, farmers do not have enough water for their crops and cattle and goats are even running out of food as the land continues to dry up.

Vítor Fernandes, owner of a small farm in Odeleite, criticises authorities for what he calls “poor management” of the water supply of the Odeleite dam.

“The dam is ours, yet water is taken from here to other places in the Algarve and we are left with little to nothing,” he told the Resident.

The drought is not exclusive to the eastern Algarve, however. Many other parts of the Algarve are also being affected, as well as the neighbouring region of the Alentejo.

All of Portugal is experiencing the effects of lack of rain, although the Algarve is the most affected with half of the region described as in a state of “extreme drought”.

While worrying, the situation is still not considered “absolutely dire”. Regional water authority Águas do Algarve (AdA) says water reserves are enough to supply the region until at least the end of the year.

If the situation does not improve by 2020, AdA will meet with the national water authority Águas de Portugal and the Ministry of the Environment to implement a “contingency plan” which could involve “rationing water supply to the population”.

For now, AdA is calling on the Algarve’s population to use water wisely to help manage the remaining water as well as possible.

Meantime, Portugal’s sea and atmosphere institute (IPMA) forecasts mostly sunny weather in the Algarve for the next 10 days, although it could rain in some parts of the region this Thursday and Saturday. For Castro Marim though, rain is not expected.

Mayor calls for new dam
Castro Marim Mayor Francisco Amaral believes that the construction of a third major dam in the municipality would be “extremely important” to help the area cope during these times of extreme drought.

“I’ve been talking about the need to build a dam in the area of Foupana, but no one cares about this problem,” the mayor told Lusa news agency.

The Ministry of the Environment said last year that it had “no intention of building an additional dam to complement Beliche and Odeleite,” explaining that droughts are not solved with the construction of new dams.

However, Lusa adds that the idea of a new dam is also backed by farmers in the north-eastern Algarve who believe that a third reservoir could be a solution to the long periods of drought which have been affecting local agriculture and driving away investment for years.

Castro Marim is already one of the most deserted municipalities in the Algarve and struggles with declining population numbers and the feeling that it is often “forgotten” by central authorities.

Tejo “dries up”
Meantime, sections of the Tejo, the river that flows south of Portugal’s capital city Lisbon, have run dry due to the drought but also “erratic management”, as described by Expresso newspaper.

Part of the problem has been blamed on Spain, which is being accused of water retention and of only “opening its Cedillo dam to supply the river with water when it needs to meet international impositions”, writes Expresso.

The situation would not be nearly as bad if Portugal wasn’t so desperate for rain.

Guadiana River, the international river that defines a long stretch of the Portugal-Spain border, is also feeling the effects of the drought, with some sections also drying up between Elvas and Olivença.

Diário de Notícias has published photos of dead fish washing up along the riverbanks, which are dying due to the low water levels and the bacteria that form when the water is so low.