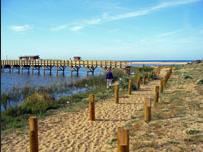 PEDESTRIANS AND cyclists are at risk of serious injury from an unfinished section of the Ecovia do Algarve, a bicycle and pedestrian route, which ends abruptly at Praia dos Salgados, between Albufeira and Armação de Pêra.

The new wooden cycle track ends abruptly, more than one metre above the shore of the lagoon, without any protective barriers or signs to warn people who may be on there.

Local resident Dawn Goodfellow said: “It’s very dangerous, especially for children on bicycles; there could be a nasty accident. “I visited the cycle track with my great grand-daughter, who is two,  on Saturday (May 31), and I was worried that she could have fallen off the end, because the safety barrier was pushed into the water,” she added.

A spokesman for Albufeira Câmara told The Resident: “The cycle track is a project that has been contracted out, with each Câmara being responsible for a section of it. Albufeira Câmara has completed its section and it was inaugurated in April this year.”

The spokesman said that the abrupt ending of the track is where the boundary lies between the Albufeira section and the Silves section.

“Silves Câmara is responsible for continuing the cycle track after the bridge at Praia dos Salgados,” the Albufeira Câmara spokesperson said. “Every week we try to close the end of the track to make it safe for people until it has been completed by Silves Câmara, but the obstacles are constantly being removed.”

A spokesman for Silves Câmara could not say when their section of the cycle track was due to be complete, however he said that the safety issue will be addressed.

The cycle track is part of the Ecovia project, a bicycle and pedestrian route that crosses the Algarve, connecting Sagres Fortress to Vila Real de Santo António at the border with Spain. This route is an ecological corridor where motor vehicles are banned, except when the path crosses urban areas with low rates of traffic.

Along its 214 kilometres, the Ecovia do Algarve crosses 12 of the region’s 16 districts and includes pavements and land paths. The signs can be horizontal and vertical, the blue lines only being used in paved areas.