Portugal Resident
Home Original Algarve could become the next Hollywood 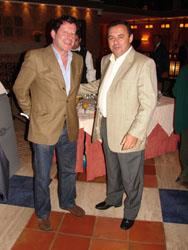 THE ALGARVE could become the Hollywood of Portugal following the official launch of the Algarve Film Commission (AFC), whose aim is to promote the region as a filming location for the global cinema industry.

The Commission’s president is Portugal’s most internationally known actor, Joaquim de Almeida, who has starred in several high profile films including Clear and Present Danger with Harrison Ford, Desperado with António Banderas and Salma Hayek and the award winning television series 24, among others.

A press conference to unveil the new association was held in Albufeira on Friday night, organised by Região de Turismo do Algarve, (RTA) the Algarve tourism board.

Following two years of research and viability studies, the AFC was set up in May 2006 and seeks to position the Algarve as a filming location for national and international productions and it is proposed that the AFC will become a member of the International Association of Film Commissioners. The majority of the Association’s 317 members are located in the United States, but there are also several based in Europe and Canada.

Joaquim de Almeida was full of praise for the Algarve, saying that it is “one of the most attractive areas of all the regions in the Mediterranean”.

According to the actor, the major strength of the Algarve is its luminosity. “There’s more than just the summer months, this region is special between October and March: we have many hours of daylight here for filming,” he said.

“Just recently, independent producers in Los Angeles have been saying to me that they don’t know any good locations for filming. I say to them that, in winter, the Algarve is the ideal place.”

Good accessibility, the diversity of backdrops for filming such as beach, hill ranges and historic sites, along with a choice of quality hotels, are just some of the other factors that, according to the AFC president, give the region an advantage over many other world locations.

“If Morocco is able to attract major productions such as Gladiator and various religious films, there is no reason at all why the Algarve cannot do the same,” said Joaquim de Almeida.

Although he is not able to dedicate himself to the AFC’s work on a full time basis due to his heavy acting schedule, the actor intends to become the cinematography ambassador for the region abroad, particularly in the US.

Licences must be issued quickly

Almeida highlighted one of the problems that could hinder the AFC if it is not resolved, namely the delays incurred in the issue of filming licences on the part of the authorities. The actor called on the councils to make this process much easier and faster or risk losing out on lucrative contracts for the region. Almeida gave the example of a production he was involved in having to be moved from Bulgaria to the Czech Republic at the last minute. He explained that the transfer was accomplished in just a week-and-a-half, “due to the willingness and excellent co-operation of the Czech authorities.”

In addition, Almeida spoke about the importance of training technicians in the Algarve, so that it is not necessary to rely on sourcing qualified crew from Lisbon. He also mentioned that a guide to production support needs to be produced to ensure that film companies have easy access to the local information they need.

Among the benefits of films being made in the Algarve is the income they would generate and the jobs that would be created, not forgetting the promotion of the region on the big screen. On average it is estimated that 30 per cent of a film’s budget is spent in the region where the film is being made. A typical feature length film requires 60 days filming time and a crew of around 100 people.

In order to demonstrate the importance and value of the establishment of the AFC, the example of Andalucia, the Algarve’s closest neighbour was given. Andalucia’s film commission was created in 1998 and, by 2004, it had already been involved in more than 1,000 productions, which has had a direct economic impact, bringing in 245 million euros to the region.

In order to help ensure its aims are achieved, the AFC is setting up partnerships with the Instituto do Cinema Audiovisual e Multimédia (ICAM), the Grande Área Metropolitana do Algarve (AMAL) the entity which represents the interests of all 16 Algarvean councils, the Algarve University and the RTA, among others.