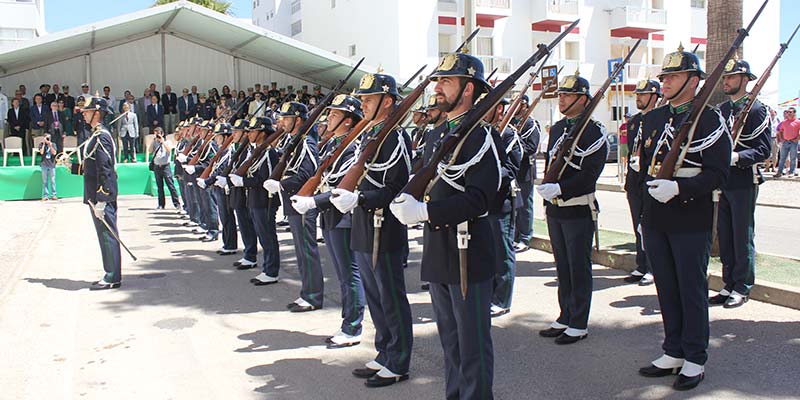 Over 550 additional police officers are being deployed across the Algarve this summer as part of the government’s ‘Algarve Seguro’ programme. The goal is to make the region as safe as possible for residents and the hundreds of thousands of tourists who come here for their summer holidays.

Portugal’s Internal Administration Minister Eduardo Cabrita was in Faro on Saturday (June 22) to unveil the programme, which apart from strengthening the region’s security forces will also focus on improving the region’s firefighting efforts and increasing airport security and border control at Faro Airport.

The Algarve sees its population increase exponentially in the summer and its security forces are reinforced every year to ensure they are able to deal with the huge influx of tourists.

In a nutshell, ‘Algarve Seguro’ aims to prevent crime and have more officers on the region’s roads and at the main summer events that will be taking place.

Thus, GNR police are receiving a boost of 200 agents and four canine support and horseback teams, it was announced.

The police force will be deploying 500 agents to the region’s main summer events and will also be working closely with Spain’s Guardia Civil, Italy’s Arma dei Carabinieri and France’s Gendarmerie Nationale forces.

Meanwhile, PSP police will see their numbers increase by 360 agents, five patrol teams and four “prevention and rapid response” teams. The police force will also collaborate with the Cuerpo Nacional de Policía in Spain and the Police Nationale in France.

At Faro Airport, security will be reinforced with a 40% increase in the number of border control inspectors, while border control authority SEF will also be carrying out more inspections and awareness campaigns to ensure that businesses hiring foreigners are doing so legally and to fight human trafficking and illegal immigration.

The national road safety authority (ANSR) will also be carrying out awareness campaigns aimed mostly at motorcycle drivers aged between 25 and 44, encouraging them to drive safely.

Speaking to reporters at the presentation of the programme, Eduardo Cabrita said that “Portuguese nationals have understood that safety is a decisive factor when it comes to their quality of life and also the tourism sector.”

As the minister explained, holidaymakers take safety into account when deciding where to go and the Algarve “must maintain its reputation as a safe destination”.
“Since 2008, crime rates have been dropping substantially in Portugal and, in the last three years, the reduction has been significant. Safety is crucial to the Algarve,” he said.

Cabrita added, “in 2013 we were the 18th safest country in the world, today we are the third, but we cannot become complacent because of these results”.

“We are prepared for fires”
Following the devastating fire that ripped through Monchique and parts of Silves and Portimão last summer, the minister guaranteed that the region’s firefighting teams will be “ready” for any fires that may break out in the region.

“There will certainly be fires. What happened last year was that the absolute priority was saving human lives and we tested support mechanisms for the population which involved local authorities and institutions,” Cabrita said.

He mentioned the fire that broke out two weeks ago in Monchique, which “within one hour” was being fought by 10 air support vehicles as well as hundreds of firefighters on the ground.

“What is most important is combining our firefighting means,” the minister said.

Vítor Vaz Pinto, head of Portugal’s civil protection authority, revealed that there will be four extra “permanent intervention” teams at the Alcoutim, Monchique and Portimão fire stations. There will also be two helicopters ready to be deployed at all times in the Algarve.

Crime rates drop
Fewer crimes were reported to PSP police in the Algarve in 2018 compared to the year before.

And out of all the crimes reported, just 4% involved tourists as victims. In the cases that did involve holidaymakers, most of the crimes were related to valuables being stolen from vehicles or distraction thefts.

Construction work to adapt the former fire station into a full-fledged police station cost €1 million, an investment that was lauded by the many public figures who attended the inauguration, including the Minister of Internal Administration Eduardo Cabrita and Portugal’s GNR Lieutenant General Luís Botelho Miguel.

“These improvements are in line with the expectations of the institution and its agents who every day respond to the needs of the local population. I am well aware of the challenges we face, particularly the agents who work in this region,” the lieutenant general said.

With the new station, hopes are that the GNR officers will have improved working conditions which will lead to greater efficiency and quality of service provided to citizens. And when some well-deserved rest is needed, the station’s dormitories even boast a sea view.

Loulé Mayor Vítor Aleixo also attended the event and stressed the importance of the Algarve’s security forces, which help maintain the region’s reputation as a safe destination.

“Our region has gained an international reputation and safety levels cannot drop. We have to remain one of the safest destinations in the world,” he said, adding that the success of the Algarve as a tourism destination depends on its ability to provide holidaymakers with a safe environment.

The mayor also praised the new station for giving officers the working conditions they deserve, adding that the local council will also be purchasing motorcycles for the local police force.

Minister Eduardo Cabrita also spoke of the importance of maintaining the Algarve’s status as a safe place to visit. “Safety is currently a decisive factor for the quality of life of populations, but here in the Algarve, it is also key to the success of the tourism sector. Tourism is intrinsically linked to security.”