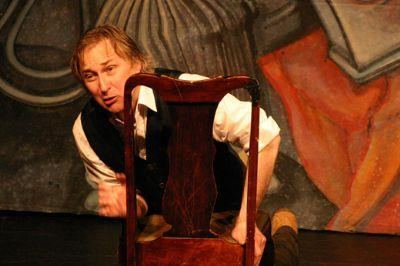 In celebration of Bloomsday, the annual commemoration of James Joyce, a performance of Jimmy Joyced!, a one-man show written and performed by Donal O´Kelly, will be staged at the Municipal Theatre in Faro on June 18.

Donal O´Kelly admits that he is “mad about James Joyce and have been all my adult life” and told the Algarve Resident that although he is familiar with the life and works of one of Ireland’s most famous writers, those coming to watch the play do not need the same in-depth knowledge.

“Jimmy Joyced! is a rollercoaster of a play that appeals to everyone.  It is a perfect way to be introduced to the world of James Joyce and has successfully entertained audiences in Ireland, the UK, France and Los Angeles showing its universal appeal,” he said.

Set in 1904, the year Joyce set his renowned novel Ulysses, the play looks back at James Joyce’s personal journey in 1904 through the eyes of a Dublin market stall holder.

The play, which will be performed in English, saw Donal O´Kelly nominated for an Irish Times/ESB best actor award in 2005 and has been brought to the Algarve in conjunction with the Irish Embassy and Culture Ireland.

Jimmy Joyced! will also be performed in Porto on June 13 at Teatro Nacional São João and at the Lisbon Teatro São João on June 16 as part of the Irish Embassy’s celebrations of Bloomsday.

“It is a pretty fast and furious production and a real journey through the mind of James Joyce,” added Donal O´Kelly.

Tickets for the performance, which starts at 10pm, cost  five euros.