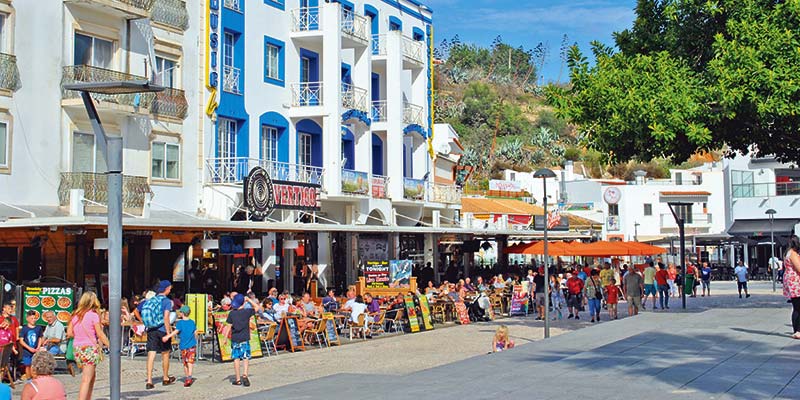 Two years ago I accompanied the GNR to the Strip in Albufeira to see the situation for myself. It was a Tuesday in August, at 3.30am in the morning.

What I saw to my mind was not Portugal at all, but a night life area which had somehow gone wrong. There were thousands of people, many under the age of sixteen, many clearly drunk, a few collapsed in the streets clearly worse for wear, broken beer bottles and vomit in the streets.

I returned to the GNR Albufeira station and the reception area was full of those who the GNR had found unaccompanied and drunk in the streets and those who had been involved in some form of incident requiring assistance. All these people were tourists.

The tragedy of this is that this problem has been going on for years, despite the many calls for change. The recent Algarve Resident article shows, however, the situation has not improved.

Not only do these people cause trouble overnight, this also extends into the day time, again fuelled by excessive alcohol.

This anti-social behaviour discourages families from visiting the area and tarnishes the Algarve’s fine reputation as a safe tourist destination
In an effort to try and develop initiatives to improve the situation, Safe Communities Portugal held a seminar in December 2018 in Albufeira entitled “Nightlife, Tourism and Alcohol”, which was attended by the Secretary of State for Internal Administration, the GNR, the President of Regional Tourism Algarve, the Mayor of Albufeira (who had to leave half way through) APAV, and various other entities. About 100 people attended.

Despite the fact there was extensive publicity beforehand and held in Portuguese, conspicuous by their absence were the bar owners and their staff who could have learned much from the event.

The Mayor of Albufeira has recently been quoted as saying that a “Code of Conduct to try and bring an end to these issues” is in progress. With respect over the years there have been many concrete recommendations that have been made by AHETA, the GNR, Safe Communities Portugal and others to address these problems, and a Code of Conduct is long overdue.

The Mayor also calls for “more police between April and November, stating “I am sure things will change”. However this does not address the root cause of the problem which exists anywhere where underage drinking is tolerated in the bars despite the presence of private security; the bars offer prices and bargains which encourage excessive drinking; bars remain open overnight with drinking tolerated in the streets.

This year we have seen the largest seasonal increase in police reinforcements in the Algarve, over 500, but simply throwing police at this problem detracts from their other priorities and leaves less coverage elsewhere.

This places extra workload on the emergency services, and can damage the reputation of areas affected.

However, by understanding the problems related to excess alcoholic consumption overseas and the potential for social disorder this brings, we can then be better prepared with the necessary steps in place to reduce the risk and therefore the impact such problems bring to our society here.

Findings overseas show there is a strong link between alcohol consumption and violent or aggressive behaviour, partly because of the way in which alcohol lowers inhibitions.

However, intoxication on its own does not cause violence, and people who are drunk do not often become aggressive unless they feel threatened or provoked.
It is because of this that pedestrian density and the concentration of bars is strongly linked with violence and social disorder in an area, as a consistent body of research has demonstrated.

As a former Head of the Greater Manchester Police observes, “there is a point at which the number of premises in an area precipitates violence no matter how well they are managed individually”.

Crowding and intoxication also have implications for individual licenced premises: ‘vertical drinking establishments’ which are often crowded, with poor bar access and little seating, are associated with increased amounts of alcohol-related violence.

Sociability and the fact that many bars and venues are seen as too noisy and crowded, very late opening times, which allow people more time to drink at home before heading out, and cultures of ‘determined drunkenness’, where regular heavy drinking is now normal in many areas.

A recent survey in the UK showed 92 % of people drank alcohol on their last holiday abroad, 75% said they drank more on holiday abroad than they would normally at home. Fifteen per cent drank more because the drinks were part of an all-inclusive deal.

And 34% said that their drinking started before they arrived at their holiday accommodation – with 16% who began drinking at the departure terminal of the airport.

The problems at the Strip area in Albufeira need to be put on a “fast foot”. The causes are well known and there needs to be a more determined approach to address the causes before this causes greater problems

Responsible Tourism
A Congress on Responsible Tourism in South Africa declared that Responsible Tourism should: include measures that contribute to the conservation of natural and cultural heritage of the local community; engender respect between tourists and hosts, build local pride and confidence and address issues such as cultural insensitivity and anti-social behaviour.

Drinking binges, inappropriate dress and anti-social behaviour are just as upsetting to local people in any destination.

The easy question to ask is – would you be comfortable with someone doing this in your home? Because responsible tourism recognises that, first and foremost, when you travel, you are entering someone’s home. So you need to learn the house rules and just be nice.