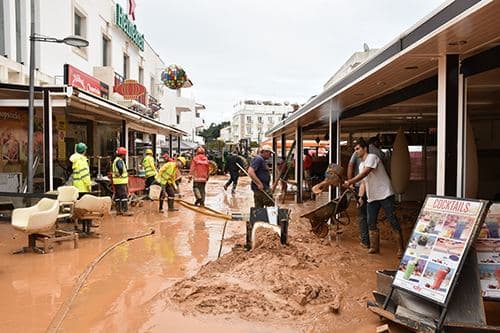 With Albufeira’s post-flood repairs close to completion, mayor Carlos Silva e Sousa has said the town’s desperately needed flood defence system will not be in place for at least another four years.

In fact, the project isn’t even on the drawing board. It still has to be developed – with the help of local people, as well as technical experts.

Talking to Lusa news agency, Silva e Sousa said: “As this will be very expensive work that needs to last for more than a century, we need to hear the opinions of the population in order to choose an option that best suits our needs.”

One of the many ideas to discuss further is the plan to build a tunnel to take flood water to an area that is not affected by tide levels.

To this end, Albufeira is in touch with flood specialists who advised Lisbon council on its defences, and it will be working with specialists from the University of the Algarve and the National Laboratory of Civil Engineering.

Any future plan has to take into account rising sea levels, and thus is unlikely to even get started before 2017, adds Lusa.

Meantime, many businesses are still awaiting financial support promised by the government after the devastating floods in November last year.

The damage toll – well over €14 million – was the most expensive ever to have been suffered by the town.

Repairs initiated by the council are also believed to have run to “over a million euros”.