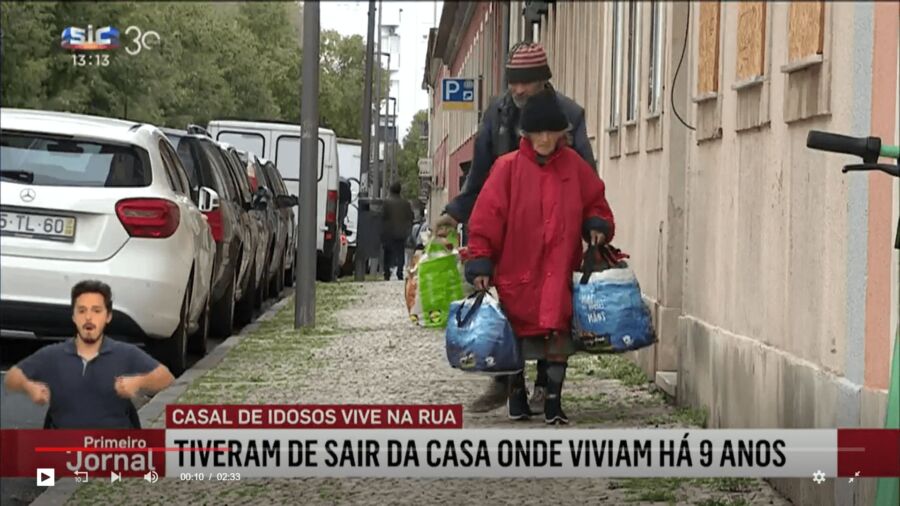 Roam streets with belongings; former apartment to be transformed for AL

A perfect example of why PS Socialists on Lisbon City Council want further limits to the number of properties removed from the permanent housing market came this weekend from SIC television news.

The station recounted the desperate plight of Alberto and Maria José Gabriel, aged 75 and 77 respectively.

Two months ago, these pensioners – who apparently worked throughout their lives but survive on a joint income of “around €700 a month” – were ordered to quit their home of the last nine years in Arroios, as it was in a building due to be transformed into a hostel for AL (Alojamento Local/ short-term tourist lodgings).

Unable to find even a room they can afford to rent, the pair have been living on the streets ever since, the few belongings they have with them in large shopping bags.

They take shelter in Gare do Oriente (the railway station). Neither is physically ‘well’. Alberto suffers from diabetes. Maria José has heart problems.

It was in Gare do Oriente the couple was noticed by Maria Assunção and her partner Paulo who have been doing their best to help ever since.

SIC shows the younger couple carrying Alberto and Maria’s bags; leading them to a place where they can wash/ change clothes/ have a hot meal.

Maria Assunção cannot understand how something like this can have been allowed to happen. “They are cold (…) they need a home. This is very difficult”, she told SIC.

Maria Assunção has started a petition which she hopes will gather enough signatures to help Alberto and Maria José find some kind of refuge (a corner that is not within a train station…) Says SIC, she means to send the petition to President Marcelo – who began his mandate over five years ago with the noble intention of taking people off the streets of the capital.

One positive aspect of this story is that the local Santa Casa da Misericórdia (Church charity) has told SIC it will be getting in touch with the parish council of Arroios with a view to “the possibility of an emergency response”.

According to a note online, the parish council in the past has told Maria José “to go back to her birthplace” (wherever that may be).