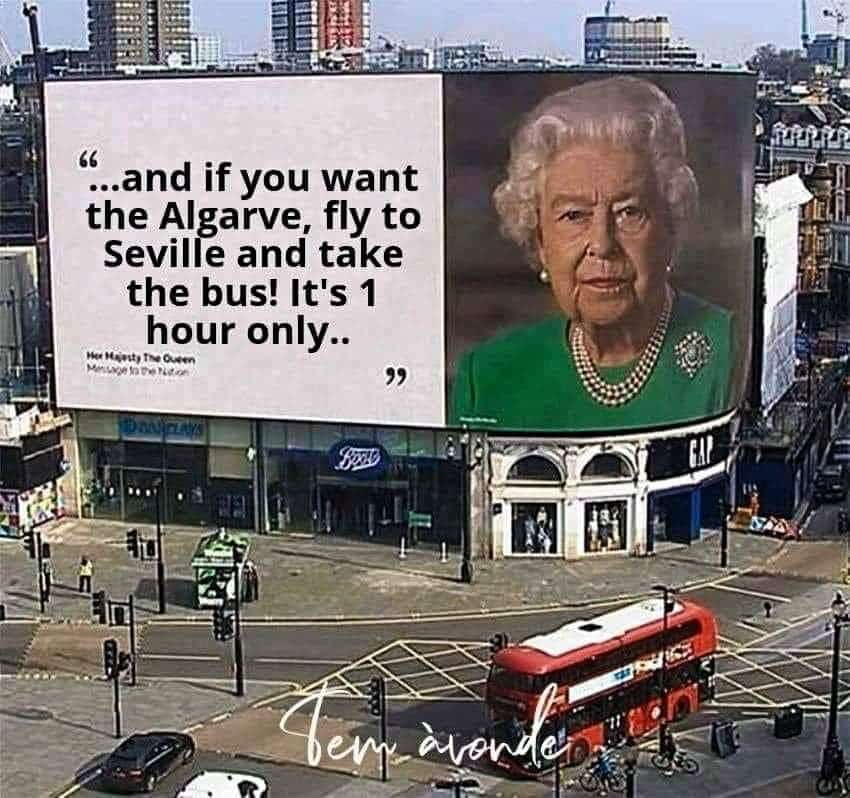 Campaigners desperate to win Portugal a much-needed ‘air bridge’ for visiting Brits have decided ‘enough is enough’. If the British government is using skewed data to leave Portugal ‘out in the cold’, Portugal can come up with some mixed messages of its own.

‘Heaven’ can be reached by flying to Seville (in Spain, which has been deemed ‘safe’ for Brits to travel to) and then hiring a car, or taking public transport.

“And when you get back home, don’t lie”, says the ad. “Just say you have arrived from Heaven”…

Much more blatant is the spoof image of a massive billboard featuring a message from Her Majesty Queen Elizabeth II: “And if you want the Algarve, fly to Seville and take the bus! It’s one hour only…”

The initiatives may all be tongue-in-cheek – and technically encouraging people to break the law – but the sense of outrage that a foreign government could plunge its oldest ally into such social and economic chaos is transversal.

The Resident has been inundated with emails from Britons – most of them vowing to come on holiday here whether there is an air bridge that precludes 14 days quarantine on their return or not.

A number are taking the issue up with their MPs – and one has told us that the British system for checking that people do in fact remain in quarantine when they return from Portugal is “a joke”.

“I’ve had zero follow-up from any health/ government authority throughout my quarantine”, she told us, adding that she is now planning to return in August “air bridge or not”.

Meantime, we’re told that diplomatic efforts to get the British government to revise their catastrophic decision are continuing “every day”.

As for the overall virus picture, the situation in areas of Greater Lisbon remains an issue, but the rest of the country has seen numbers steadily reducing, and fewer and fewer people requiring intensive care.