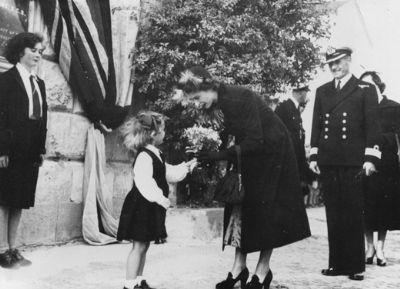 I have often written stories about my earlier years living in Portugal, based on my personal recollections. Occasionally I’ve met someone who remembers the same period of time but often in an entirely different way and questions what I have written.

It’s inevitable, I suppose, that this will happen because our poor old memories can only be stored from our personal point of view.

I’ve met a lot of people during my life, both before and after my 40 odd years in Portugal, and in my time I have been on several committees and attended or organised many events. My memory of each one will be totally different to anyone else’s because I will see it either through the eyes of the hostess, in which case I’ll be flapping about wondering about this detail or that, anxious and doing my best to look attentive but probably hardly conscious of the people who are attending – alternatively I’ve been the guest having a great time but remembering ‘that irritating woman who didn’t pay attention to a word I said!’

Whatever we do will be remembered through our eyes only.

We might arrive at an event alone or with someone else, done happy or sad things throughout the day, been annoyed or tired, seen different things getting there, maybe had some good or bad news and all of those things will be influencing how we feel during the occasion. We will speak to different people about different subjects and either hated or loved, been bored or involved with the occasion. If you talk to someone the next week who was also there, you would probably think you were both at different places.

Of course another thing we are all fond of doing is, dare I say, embellishing. My father often told me wonderful stories and I adored him because he knew so much about everything. A question never went unanswered and it took a few years of school before I began to realise that this particular fountain of knowledge had its source in a great imagination and often a kernel of a memory greatly enhanced.

I’m sure we all have a favourite story that has done the rounds over the years, greatly improving with age until we hit on someone who has heard it before and has the temerity to correct a detail. I think in such a small community as the Algarve, the rule of etiquette in this situation must be to listen politely (again) and keep quiet – you never know when someone will catch you at it!

So many objects and places can also trigger memories; I was hunting for some paperwork the other day and came across a plain brown envelope. When I examined the contents, I discovered things my mother had kept belonging to my late father. There were several newspapers dated 1915 relating to the First World War which must have been kept by his parents before him, and a cut out of the abdication speech of Edward the eighth in 1936. Then from the Second World War I found a menu of meals served on board HMS Revenge on Christmas Day 1939, also a copy of the Egyptian Mail in1941 in English. There was even his old sailor’s pay book from HMS ‘Stag’ (Ismailia) April 30, 1942. Details of his pay and the amount deducted for my mother in England, which were both unbelievable small amounts to me now. Finally from after the war there was his Hamburg Dock Pass issued in 1946, a Sunday Times Of Malta 1949 and a Souvenir copy of the Queens Coronation in 1953.

These things were my mother’s memories; ageing and yellow, they told me so much of the lonely war years when my father was constantly away from home, travelling on ships getting necessary supplies to men fighting the war. The ships would have been constant targets for air attacks and although surrounded by destroyers trying to protect them, they didn’t always succeed.

I remember my father telling me some of the terrible things he witnessed, but very few. The memories were far too painful, he preferred instead to make up adventure stories to tell the daughter he hadn’t seen for the first two years of her life.

Then there were the years after the war when I can recall our time on the Island of Malta where my father was stationed; Princess Elizabeth as she then was, and her husband the Duke of Edinburgh also in the navy, visited frequently. His uncle, Lord Mountbatten was the Admiral of the Fleet at the time and the couple seemed to enjoy the privacy that the island brought them. I even got to curtsey and present her with a bouquet when I was just four. I wonder if she remembers the occasion.

The wonderful thing about our memories is that happy ones will always be there bubbling close in our thoughts to make us happy. The sad ones nature has a way of burying deeper down, not lost but hidden, it’s when something forces them to surface that we hurt. Modern thinking is to make them emerge and deal with them, but I’m not young and in our time we kept them to ourselves. In my own case, I learnt lessons in survival and I’m sure it made me stronger and more determined to stop some of those things happening to others, but I’m just me and I need all my memories to balance my life –  you may feel differently. One thing’s for sure, I’m still here and making memories. Maybe I’ll see you in Lagoa at my next play ’Glorious.’ Now that will be something to remember!

Jenny Grainer can be contacted by emailing features@algarveresident.com