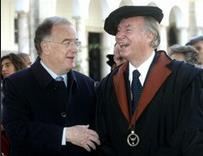 ONE OF the most important Muslim spiritual leaders, the Aga Khan, called for religious tolerance and understanding during a short trip to Portugal last weekend. Prince Aga Khan also criticised the publication of cartoons depicting the Prophet Mohammed as “insensitive”.

The Prince was in Évora to receive an Honorary Doctorate from the University of Évora for his efforts towards establishing world peace and his contribution to relieving poverty in many parts of the world.

During the ceremony, attended by outgoing President Jorge Sampaio, the Dean of Évora University, Manuel Ferreira Patrício, joined the President of the National Higher Education Evaluation Board, Adriano Moreira, to honour the Aga Khan’s efforts to resolve religious conflicts worldwide and his promotion for the development of peace.

The Aga Khan is the Muslim spiritual leader of the Shia Imami Ismali branch of Muslims, said to be directly descended from the Prophet Mohammed. He is also the President of the Aga Khan Development Network, one of the largest privately funded development organisations in the world, which works towards eliminating poverty, social exclusion, and promoting economic development in countries in Africa, Central Asia and the Middle and Far East.

The title of Aga Khan is an honorary hereditary title which was awarded in the 1930s to the first Aga Khan, Prince Aga Hassanaly Shah, the 46th spiritual leader of the Ishmaelite Muslims by the Shah of Persia.

The Dean of Évora University said that the Aga Khan has devoted “immense energy and resources” to social pluralism and world peace. “The Aga Khan Development Network is an extraordinary body dedicated to economic, social, cultural and educational schemes on an international scale,” he said. “The Prince’s work is a living testament to the vocation of a man dedicated to building bridges between civilisations and cultures.”