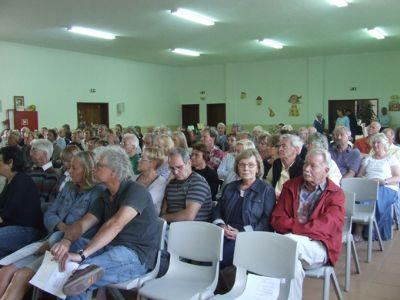 More than 150 foreign residents congregated at Aldeia São José youth centre in Alcalar near Portimão on Monday to discuss an action plan against what they say is the “unbearable” noise caused by the Algarve Motor Park.

A German resident, who is one of the founding members of the movement but who asked not to be named, told the Algarve Resident: “It has been decided that we will proceed with a complaint about this situation to all of the regional authorities including the Câmara, CCDR (the regional development commission) and to the press.”

Although the meeting was held in English, German and Portuguese, many residents said that they struggled with the language barrier.

“There is a problem with the languages because we are all of different nationalities,” said the German resident, adding: “in future we will perhaps meet as a smaller group, but we are serious and we will continue.”

South African resident Paulette Fouché said that one option that was discussed at the meeting was to have a sound test carried out around the time that the Le Mans series racing takes place this summer.

“A company has quoted 6,000 euros for the sound test, which would take place before, during and after the Le Mans race in a variety of locations,” she said.

“This would confirm whether the noise levels are within EU legislation or not.”

She also said that, at the moment, testing at the track has gone on until midnight and all throughout the day at weekends.

Danish resident Jeanette Ellis said that she felt the meeting was useful and would be willing to contribute money for a sound test to be carried out.

“I think that it’s great that some brave people have gathered us up together to stand up for ourselves instead of us all moaning in our own homes,” she said.

At the time the Algarve Resident went to press on Wednesday, no one from Portimão Câmara or the motor park were available for comment.

The next residents’ meeting is due to take place in a few weeks.