PS Socialists and their leader prime minister António Costa received the best election results they could have hoped for on Sunday night – an absolute majority, taking the party into historic new territory and ensuring that the State Budget that plunged the country into political crisis will, in the end, go forwards.

This is the first time the PS has won an absolute majority after six years in power – and the fact that they did it after pre-election polls, and pundits, said they couldn’t was all the more remarkable.

It was a brutal campaign, and it has left the ‘turncoat former allies’ Bloco de Esquerda and CDU (including PCP communists and the Greens) in tatters – the former losing no less than 14 of its 19 MPs, the latter six.

The centre-right fared barely any better (PSD lost three seats, securing less than 30% of the vote); CDS-PP was annihilated (not one MP was elected).
PAN, too, lost three of its four MPs, and many would say its relevance.

In political terms, it was a bloodbath. António Costa’s bid for a majority turned into a winning strategy and, for this, as secretary-general of the PS, he has carved himself a special place in party history.

But the night was an eye-opener on another front as well. Chega, the right-wing party no other on the mainland seems prepared to deal with, scored a blistering victory, coming in now as Portugal’s third most popular political force, behind the limping PSD.

A party which in 2019 only managed one seemingly indefatigable MP (André Ventura) has now got 12. Even in the formerly communist bastion of the Alentejo, Chega managed to make inroads – and the Algarve too has a Chega MP; Pedro Pinto, a businessman and former director of a magazine connected with the bullfighting sector.

“António Costa, I am coming after you!” was André Ventura’s rallying cry as Sunday night’s results showed Chega was on a roll.

“If the PSD hasn’t done its job, we will,” Ventura thundered to rapturous applause. “We will be the opposition in Portugal! And it won’t be a cuddly opposition,” he warned, referring to the benign nature of PSD leader Rui Rio’s form of opposition. “Everything will be different in parliament … there will be a party telling the truth … a very strong parliamentary group!”

But now that the dust has settled on all the ‘shocks’, results and consequences, what next? How long is it going to take to get back to the real business of running the country, recovering the economy, managing the EU post-pandemic ‘bazooka’ of funding?

The prime minister is understood to have already given instructions to his finance minister to update the PS proposal for this year’s State Budget so that it can be re-presented and voted through as quickly as possible.

Even so, it is unlikely to be approved before May.

The most likely panorama is that a new ‘slimmed down’ version of government will be sworn in at the end of this month, to present its programme for the next four years to parliament in March.

That programme will be backed by the State Budget proposal, which would be voted on in parliament in Abril – going for the presidential rubber stamp in, or by, May.

The welcome news for voters is that the government’s proposed pensions increase (an extra €10 for all pensions up to €1,097 per month) will be gauged from the start of the year and paid retroactively once the State Budget has passed.

Otherwise, the 12 priorities of the PS have been listed as follows:
1 – economic growth of an average of 0.5% above the EU27 average per year and 1% above the eurozone average

9 – discussing “new forms of work/life balance”, including a consideration to apply a four-day week in some sectors

11 – supporting, until 2026, 30,000 young people in courses for ‘emerging areas’, including the university-level STEAM programme (Science, Technology, Engineering, Arts and Mathematics)

12 – increasing the number of national businesses exporting to reach an export value of 53% of GDP by 2030.

It all sounds impressive – and with an absolute majority, what could possibly go wrong?

Stacking up backstage are lots of answers to that question. AHRESP for a start – the association representing the catering/restaurant sector – is demanding grant funding to save multiple businesses on the verge of collapse. The pandemic has hammered restaurants, and the State-aid programmes this far have done little to really make a difference.

TAP is in the wings waiting for controversial State handouts of eye-watering proportions; police forces are demanding more recognition (and money); the health service is on its knees in terms of staff shortages; communities in the north are promising “never to give up” against the government’s plans to sanction lithium mining.

There are endless permutations of “trouble” to deal with, and now a parliament with its fair share of political factions smarting from election defeat, and furious that the Socialists have got their way.

The PM has promised “dialogue” and humility. “An absolute majority isn’t absolute power,” he said on Sunday night.

Expresso columnist Carla Ferreira Alves ponders these words – mindful of the fact that the last PS ‘absolute majority’ with José Sócrates at the helm degenerated into an era of corruption and cronyism.

Has António Costa got the mojo to reform “an addicted stagnant system” marked by the political favouring of friends and clients, she wonders. These will be “four years of test”. And if the PS fails, “the right will come – and it won’t be the nice centrist right that we are used to. Look at Chega’s victory and draw your conclusions”. 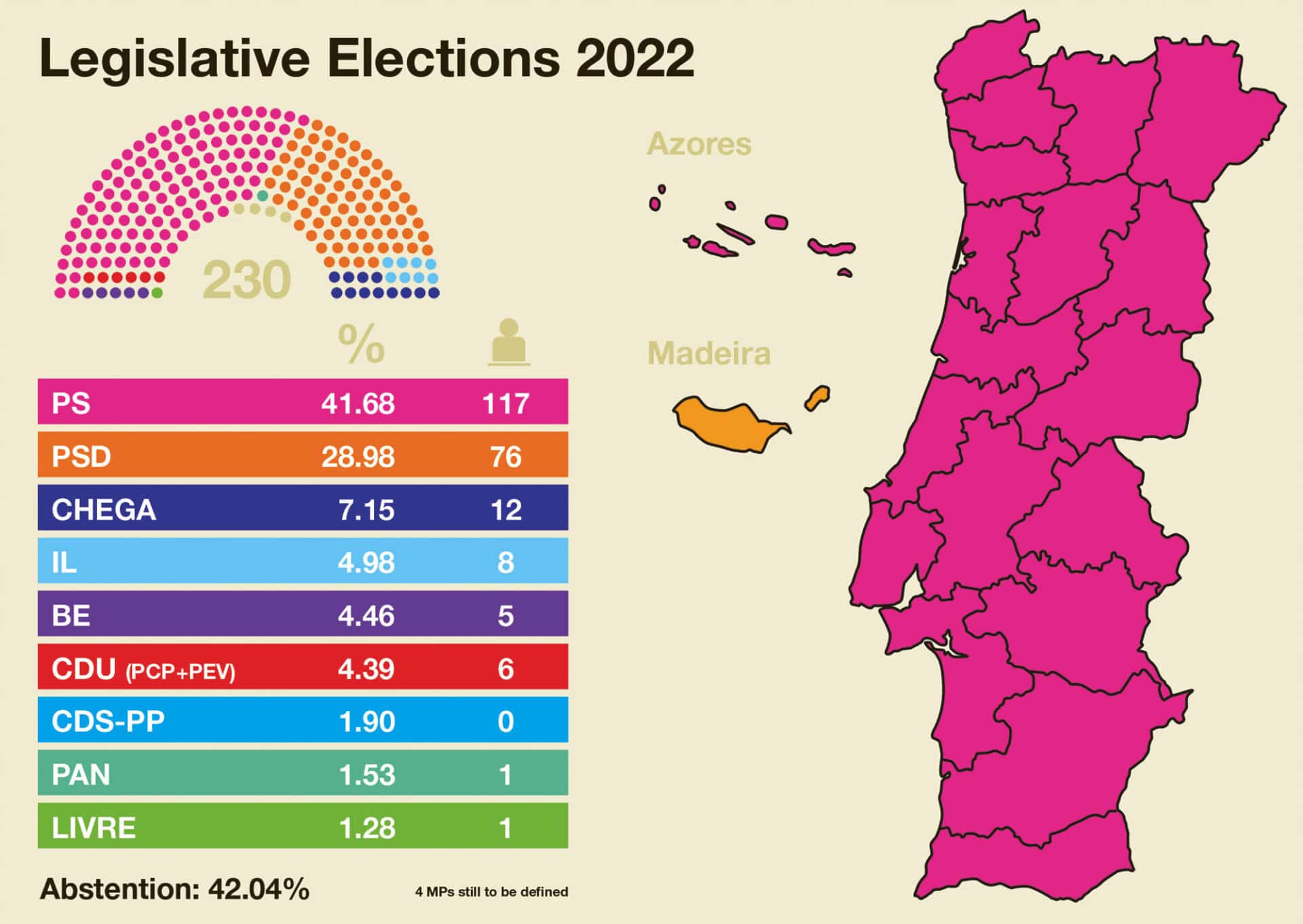