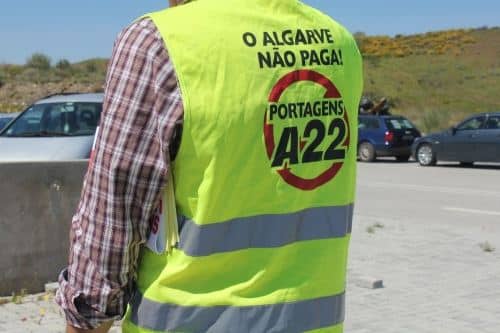 It’s still a far cry from five-year calls by anti-toll groups to abolish them once and for all, but the Portuguese government has finally confirmed that several motorway charges – including those on the Algarve’s A22 – will drop “this summer”. Despite the news, calls for the “immediate suspension” of the A22 charges are intensifying as the snail-paced EN125 renovations continue to cause “traffic chaos,” now with summer just around the corner.

The plan to reduce controversial motorway charges was announced by Infrastructure Minister Pedro Marques in Parliament on Tuesday (April 26).

He confirmed that prices will drop on the A22 – also known as Via do Infante – as well as other former free SCUT highways (the A23, A24 and A25) further north.

The only reason charges haven’t decreased yet, he said, is because the PS government is renegotiating the A23 highway’s PPP (public-private) partnership.

In a nutshell, the State has to regain control of the motorway’s toll scheme, which was apparently handed to the concession company by the previous PSD/CDS-PP government.

Still, Marques said he expects everything to be sorted out by this summer.

“When prices drop, they will drop for everyone. There aren’t first and second-class Portuguese citizens,” the minister said, refusing to lower prices on some motorways before others.

The minister also mentioned the Algarve specifically, saying that “the EN125 is not an alternative (to the A22), not even with the renovations it is undergoing”.

There’s still no word, however, on how much the reductions are likely to be.

Though the minister’s announcement has been welcomed as a “step in the right direction” by anti-toll groups, they continue to vehemently defend the abolishment of the tolls.

“Even with the price drop, the situation in the Algarve is still very serious,” anti-toll leader and Algarve MP for the Left Bloc (BE) João Vasconcelos told the Resident.

“The only viable solution is to end the tolls, as even with lower charges most people will continue to use the EN125, which can never be considered an alternative,” he said.

“Not to mention that the EN125 roadworks are stopped or are moving along very slowly in some sections. And summer’s just around the corner,” he warned.

According to Público newspaper, the government’s solution is to stop the roadworks during July and August to avoid traffic troubles during the two busiest months of the year, though this is still unconfirmed.

Meantime, the anti-toll group representing the other ex-SCUTs has nearly replicated Vasconcelos’ stance.

“It would be foolish to say that the price reduction is a completely uninteresting thing. It’s obviously important, but we still defend that the solution is not to reduce the prices, but to do away with the tolls altogether,” the head of the group, Francisco Almeida, told Lusa news agency.

Though two new proposals by PCP and BE to end the tolls will be discussed in Parliament on May 6, both groups are well aware that the PS government is invested in its current plan and is unlikely to change its mind.

For example, in January the PS Algarve had already defended a reduction, describing the idea as a “fair and achievable option”, particularly as Algarvians are paying proportionately “higher prices than the rest of Portugal” to use the A22.
As for fears that public finances could suffer, local socialists said losses would be fully compensated by the number of new drivers who would decide to use the road.

Recently, however, there have been growing appeals for the government to suspend the tolls, at least while the EN125 is being renovated.

This week, the Algarve retailers’ association (ACRAL) urged the government to suspend the tolls for now, and reduce the charges by 50% once the renovations are completed.

As they explain: “With the EN125 undergoing renovations, businesses, employees and everyone else who needs to use the road is using the A22 – and that represents huge costs.”

“Just imagine the costs for someone who has to drive on that motorway every day, more than once,” said ACRAL president Álvaro Viegas.

He also pointed out that the EN125 roadworks are “practically stopped”, which only adds insult to injury.

The Algarve’s PSD party also joined the debate recently, proposing to suspend tolls during the roadworks that have been causing endless delays on the EN125.

ANJE – the association of young Algarve business people – also called for an immediate cut to charges.

Meantime, anti-toll group CUVI has scheduled a demonstration for April 30 (Saturday) at 4pm in Fonte do Boliqueime.

João Vasconcelos told us that anyone who shares CUVI’s views is welcome to show up and add their voice to the protests.