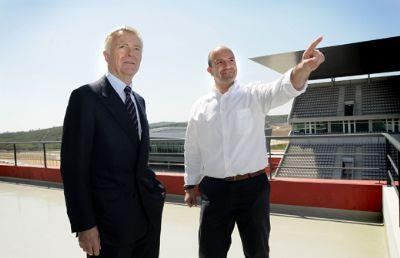 This weekend spectators and a live SIC television audience will watch 23-year-old Luciana Abreu sing the national anthem at the opening ceremony of the first ever A1GP to be held at the Algarve’s International Motor Park.

The winter series, made up of a ‘Sprint’ and ‘Feature’ race on successive days, was brought into life as an alternative to the Formula One circuit, and involves 21 teams competing under their national colours using identical Ferrari engines.

This will be the penultimate of seven stages in total, and sees home favourite and principal ‘Team Portugal’ driver Filipe Albuquerque still in with a live chance of claiming the title in England next month. The 22-year-old from Coimbra graduated from the Renault World Series via kart racing to his current position which has already brought him victory in China among a total of four podium finishes this season.

His main rivals in Portimão on Saturday and Sunday will be current leaders Switzerland, three points ahead of Ireland, who in turn enjoy a six-point advantage over Portugal. The Netherlands, a further eight points behind in fourth, are the only other team still involved in the title fight.

With 27 points up for grabs in the Algarve, this promises to be a unique and exciting spectacle. F1 boss Max Mosley, in the region for the recent Rally of Portugal, even voiced the opinion that the A1GP event on the “spectacular new track” boasting some of the “best chicanes I have ever seen” may even open the door for a return of Grand Prix racing to this country.