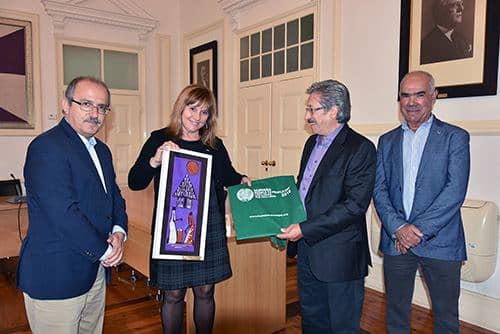 His Royal Highness, the Prince of Wales met the winners of the fourth UK Trade & Investment Awards at the British Embassy on Tuesday.

Prince Charles’s participation in the awards ceremony formed part of the official two-day royal visit by the Prince of Wales and Her Royal Highness, the Duchess of Cornwall on Monday and Tuesday this week.

The visit began on Monday afternoon when the Royal Couple were met by the President of the Republic Aníbal Cavaco Silva and First Lady Maria Cavaco Silva after which they inspected a guard of honour in a closed limousine because of the rain.

The Prince and Duchess then laid a wreath of flowers on the tomb of Portugal’s famous poet Luís Vaz de Camões and visited the Monastery of Jerónimos before being received by military honours at the President’s Official Residence, Belém Palace, where they signed the book of honour, posed for official photographs and held formal discussions.

The same afternoon, the Prince of Wales visited the Naval School, presented the British Council Award and toured the training ship NRP Sagres.

The evening was marked by an official banquet thrown by the President and his wife in honour of the Royal Couple where a firm British favourite, cream of tomato soup, was on the menu.

The heir to the throne and his future consort had a packed schedule on Tuesday where in the morning they visited the organic salad and vegetable produce company Vitacress in Alcochete – a company which has considerable sales in the UK – then went on to visit the historic city of Évora in the Alentejo and took part in the presentation of EDP’s InovGrid Project.

After lunch, their Royal Highnesses met Olympic and Paralympics sailors at Cascais Naval Club and afterwards inaugurated a new rose garden at Monserrate Parque in Sintra, where they met with volunteers and members of the British community, including The Resident Group’s Managing Director Sheena Rawcliffe and Operations Director Mark Rawcliffe.

In the evening at the UKTI Awards, the Prince met with hundreds of Portuguese and British businessmen and women whose businesses represent the commercial ties between the two countries.

The fact that so many different companies were represented at the awards reflects the healthy position of UK-Portugal trade despite the difficult economic situation, highlighted British Embassy Chargé d’Affaires, Joanna Kuenssberg O’Sullivan.

Prince Charles personally presented the first award of the evening, the Global Partnership Award which went to WS Energia for its ongoing research and development collaboration with NAREC (the British investigation centre which promotes low carbon and renewable energy technology) “which is an exciting example of young entrepreneurship in solar photovoltaic energy”.

Prince Charles said: “I’m not sure I’ll be able to contribute very much since you are all the experts and I am just a humble amateur. The fact that there are so many people here is an indication that many of you want to do business in the United Kingdom and is enormously encouraging.

“The marvellous thing for me is coming here with my wife and being reminded of the extent and duration of the relationship between Portugal and Great Britain and how far it goes back.”

He added that he had visited Portugal nearly 30 years ago to recognise and celebrate the 600th anniversary of the Treaty of Windsor (the oldest unbroken treaty between two nations in the world).

“Someone here reminded me that I was here in 1976 and the terrible thing is that as I get older I can’t remember where I’ve been, what I did, so I’m very glad indeed as long as it wasn’t an error of recognition and it wasn’t me at all!” he joked.

The Prince said that he only wished he had more time in the countries he visited to see all the places and meet all the people he wanted to meet.

“It has been a wonderfully warm welcome and again meeting quite a large number of the British community here I was reminded how huge that community is (80,000 people), many of whom have been here two or three hundred years and look remarkably well on it!” he again joked, saying it must be down to a daily intake of port.

His Royal Highness then pointed out that Portugal was Britain’s 11th most important export market worldwide, with sales of goods and services worth over £1.7 billion last year, up 18% on 2009.

Not to be outdone, Portuguese exports to the UK had shot up by 23% in 2010, despite the economic recession.

Prince Charles also paid tribute to the work of the British-Portuguese Chamber of Commerce in its centenary year and the enormous effort of the embassy team and its UKTI department: “The job they do is clearly remarkable,” he said.

“Can I finally extend my warmest congratulations to the British-Portuguese Chamber of Commerce on 100 years of strengthening the commerce between the two countries and wish you another century of outstanding service for your members,” he concluded.

More photographs of the Royal Visit will be published in next week’s edition of the Algarve Resident.
1″>news