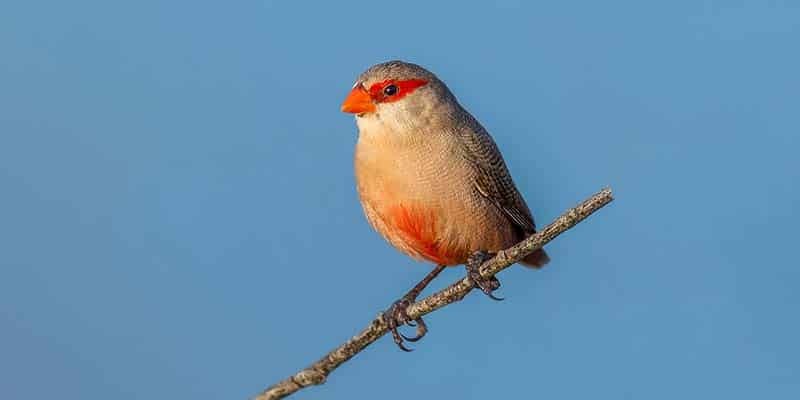 Due to its close proximity to Africa, Portugal has several exotic species that you wouldn’t expect to see in Europe and the common waxbill is no exception.

The common waxbill (Bico-de-lacre in Portuguese) is a small bird found natively in south of the Sahara in Africa. The first documented introduction to Portugal was in 1964 near Lisbon at Lagoa de Óbidos and they have successfully spread nationwide and into Spain. Since their introduction, they have spread so rapidly that combined with other introductions worldwide, they are believed to be one of the largest populations of birdlife.

These birds are often overlooked due to their small size of 10-12cm with a wingspan of a similar size, making them smaller than a sparrow. However, once spotted, they cannot be confused with any other species. I call them the “Zorro Bird” due to their appearance of wearing a bright red face mask.

Scientifically, they belong to the Estrildidae family and have the species name of Estrilda astrild.

They can be spotted almost anywhere but prefer long grasses and thick vegetation where they can forage for their favourite food of grass seed. Due to seeds containing very little water, you can often spot them at water sources drinking. Seldom will you see a single bird as they forage in flocks which can be huge in numbers.

Their main colour is a mixture of grey and brown with dark, almost black stripes and a bright red beak which continues as a stripe encapsulating the eyes. The chests have a slight pink tinge. Both sexes are almost identical and difficult to determine with the male usually looking slightly bolder.

Although classed as Granivorous (feeds on grain), they can occasionally eat insects. This is thought to increase protein levels during breeding. Breeding occurs multiple times through the year with up to four broods which has helped with population explosion.

Nests are constructed low down in dense vegetation and are weaved in a ball shape usually with a downward facing entrance. In certain instances, a second nest is constructed, called the cock’s nest, where the male may sleep. Each brood consists of four to seven eggs which take almost two weeks to hatch. Both males and females incubate the eggs and perform feeding duties before the chicks fledge at around two to three weeks, identifiable by a black beak rather than the adults’ striking red.

By far the easiest way to spot a flock of common waxbills is to listen for their distinctive but quiet high-pitched twittering, which they continue to do both while perched and in-flight.

If remaining quiet and still, it is possible that they will happily continue foraging in close proximity, making them easy to photograph. However, they are so small, a long reaching lens is required even when you are within a few metres of one!

This year, although present locally to me in the hills of the Algarve, I have noticed the numbers to be slightly smaller, maybe due to a dry winter. In the south coast wetlands such as Alvor, Ludo, Lagoa and Salgados, the numbers are large, making it easy to spot these beautiful birds.