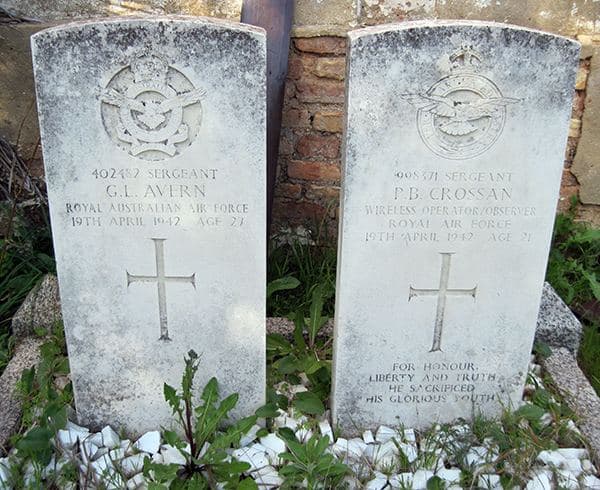 Action is needed to ensure that two young airmen are not forgotten.

Bordering Portugal and bathed by the Atlantic Ocean, Huelva province is located in the west of Andalusia. It borders the province of Badajoz in the north and the provinces of Seville and Cadiz in the east.

Contrast that with the overgrown and neglected adjoining British Cemetery, the last resting place of two airmen, 27-year-old Royal Australian Air Force pilot Sergeant Geoffrey Lennox Avern and RAF wireless operator/observer 21-year-old Sgt Philip Bernard Crossan. They died instantly when their Bristol Beaufighter crashed near Gibraleón on April 19, 1942. On the wall behind their Commonwealth War Graves is a plaque commemorating Able Seaman Percy Longthorpe who died on December 14, 1918, aged 24, following an explosion on HMS Adventure undergoing repairs at the docks in Huelva.

Out of respect for the two young airmen, my wife and I have decided to lay flowers on their graves on April 19 (this year), 80 years after they met their untimely deaths.

This was the start of a remarkable journey, thanks to the internet, that has involved the Australian Ambassador in Madrid as well as the Defence Attachés of Australia and the United Kingdom; Bishop Carlos López Lozano of the Anglican Episcopal in Spain, which has overall responsibility for the cemetery; historian Marie Hobson in New South Wales, Australia, where Sgt Avern was born and qualified as a teacher, and Gladys Mendez Naylor, a resident of Huelva whose great-grandfather, a former worker at the Rio Tinto Mines, north of Huelva, is buried in the British Cemetery.

It is believed that there are plans to renovate the cemetery but not until the summer of 2023. Action is needed now to ensure that these two young airmen are not forgotten and that their graves reflect the debt of gratitude we, in the free world, owe them and their like.

Sergeant Crossan’s headstone bears the inscription, “For honour, liberty and truth he sacrificed his glorious youth”. Unfortunately, these very words now ring true for so many young people in Ukraine.

WE NEED YOUR HELP

In the meantime, a small group of volunteers will descend on the cemetery on Friday, April 8, to clear some of the undergrowth and generally tidy the area around the graves and entrance to the cemetery. Anyone who would like to join us, please email christopher.wright@hotmail.co.uk for further details. Thank you

A final reminder of the futility of armed conflict can be seen on entering the British cemetery. It is easy to walk past the still visible bullet-scarred walls without recognising them as tangible and moving evidence of Huelva province’s involvement in the Spanish Civil War. Against these walls, between 1936 and 1941, hundreds of republican sympathisers and activists from across the province were executed by firing squads.