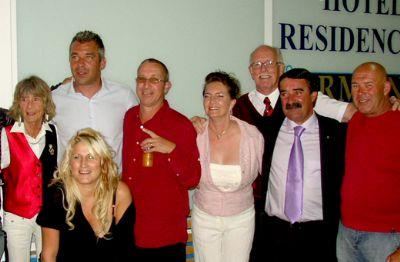 More than 200 guests attended the 97th anniversary dinner of Sporting Clube Olhanense at the Churrasqueira o Franguinho Restaurant, in Olhão on Thursday, April 30.

Club President, Isidoro Sousa, spoke of the club’s aspirations and the hope that this season would see promotion to the Premier League, followed by the construction of a new sporting complex.

Presentations were made to captain Rui Duarte, Player of the Year 2008, while Castro and Ukra received awards for representing Portugal at Under 21 level.

Olhanense manager and former FC Porto legend, Jorge Costa – he led Porto to UEFA Champion League success under José Mourinho in 2004 – was praised for developing an exciting team that has given so much pleasure to the passionate fans this season.

Francisco Leal, President of Olhão Câmara, spoke of the tremendous respect and support for the club within the local community and promised that, should Olhanense gain promotion, work would start immediately on upgrading the facilities at the José Arcanjo Stadium.

Finally, Filipe Ramires, Presidente de Mesa da Assembleia, paid tribute to the group of British supporters who are so active within the club.

Their enthusiasm and love for the club has resulted in many new friendships between the British and the football community in Olhão.