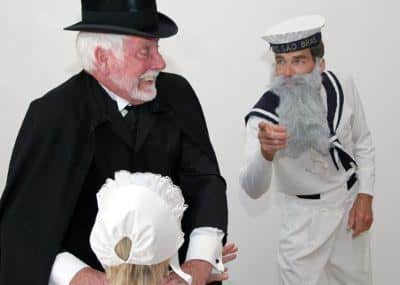 After being transformed into a 19th century music hall, the Stable Gallery at São Brás Museum will become an Old Time Music Hall and play host to a variety of entertainment on October 16 and 17.

The show is a combination of variety acts, including popular songs from the time when Britain had purpose-built music halls where communities got together to drink, eat and be entertained.

The show has been directed and produced by Joy Behennah and Marion Griffiths. They have organised a cast of 17 to create an authentic show where the majority of the music and theatrical staging comes from a Victorian play by Charles Dickens called Maria Marten, Murder at the Red Barn.

The play is based on a true story of a murder that took place in 1827. John Griffiths will be playing the murderous squire, William Cawdor and Roger Legg will star as Sailor Jack.

The melodrama includes humorous songs such as Daddy wouldn’t buy me a bow-wow and Nobody believes I’m a mermaid!

Joy and Marion would like to encourage the audience to dress in period costumes.

Charity shop Quintinha dos Animais Abandonados in São Brás has agreed to put suitable items of clothing such as straw hats, neckerchiefs and waistcoats to one side.

Money raised from the ticket sales and a raffle will go to the Quintha dos Animals Abandonados charity shop and goods will be purchased that are needed by the elderly in São Brás, these will be distributed with the help of São Brás Solidário.

The bar will open at 7pm and the show commences at 7.30pm. Tickets cost 15 euros which includes a supper of traditional bangers and mash.

Reservations for tickets can be done by sending a cheque made payable to Averil Behenna, Angels Theatre Group, Azinheiro Bx 106Z, Estoi 8005 – 415.

Call 966 086 181 for any enquiries or visit www.angelstheatregroup.com which is available in English.