People registered in job centres looking for work in the tourism sector “are not showing up for interviews” and some say they “can only make it after 8pm”, denounce hoteliers.

The issue has been highlighted by hoteliers in the Algarve who question how these people are being allowed to receive unemployment benefits when they outright refuse jobs “paying above-average wages”.

According to the Algarve Hoteliers Association (AHETA), there is a serious shortage of workers which is affecting the tourism sector, despite the fact that around 6,000 people in the region with a background in tourism are signed up as unemployed at the national employment institute (IEFP).

On a national level, the Portuguese Association of Hotels (AHP) says the number of workers currently needed in the tourism sector has likely exceeded the 15,000 that were needed in 2021.

An “experiment” was carried out in the Algarve recently involving business associations, the tourism board (RTA) and IEFP – the idea was to attract these job candidates to work in the sector. Around 500 were registered as “cooks looking for work”.

Speaking to Lusa news agency, AHETA boss Hélder Martins said IEFP representatives even attended the interviews and “tried to convince these people to take up the positions being offered, but they declined, despite being well-paid jobs”.

The hotel boss said, “it does not make sense that these people are refusing jobs only to continue receiving unemployment benefits”, and questioned whether this was a case of some of them carrying out undeclared work.

“Some said they could only come for the interview after 8pm, others were helping a cousin … (and couldn’t attend),” Martins told Lusa.

Pestana Group CEO Pedro Lopes also suspects that many of these unemployed are working illegally.

“The Algarve has 15,000 unemployed, around 6,000 of whom seeking jobs in the tourism sector. But when these people are called for interviews and do not show up, it is because they do not want to work, and some must be working illegally,” he told Lusa.

The few who do turn up for the interviews “often say they can only be there after 8pm, which means they are busy doing something else,” Lopes said, adding that the government should be “monitoring these situations more closely”.

“If people don’t want to work, it is not right that they should receive unemployment benefits when thousands of positions are being offered in the sector,” he said.

Jorge Beldade, the regional director of Grupo Minor (which owns the Tivoli hotels in the Algarve), has also spoken up about the group’s difficulties to attract workers.

“IEFP has 15,000 people looking for work, but when we ask for a group of 30, only three or four appear for the interview and do everything they can to not be hired,” he said.

According to Beldade, the interviewees “want to continue receiving unemployment benefits while working odd jobs”, instead of working a full-time job.

The issue is all the more serious given that the Algarve is expecting a record-breaking summer in terms of tourism.

“We are going to have the best summer ever, bookings are at a level higher than 2019, the year is going to be excellent, but we won’t be able to provide the level (of quality) that we should be due to a shortage of workers,” he lamented.

AHETA boss Hélder Martins has also lamented that “now that there is the opportunity to make money”, there aren’t enough workers to maintain the quality of service. Some restaurants and hotels may even have to reduce the number of tables and rooms, respectively, that they offer.

The union of hotel workers and similar industries of the Algarve (STHSA) says the “low wages and long hours” are to blame for the sector’s employee shortage.

Making matters worse are the “long hours” that tourism workers are forced to work, which are becoming “more and more unregulated” and make it “impossible for them to have a good work-life balance,” said Jacinto.

Another issue highlighted by the union boss is the precarious nature of the jobs on offer, with employers “resorting to temporary work companies, mostly illegal fixed-term contracts, fake service providing or interns taking up permanent positions”.

The closure of hotels during winter also plays a role in the current crisis. “Workers need to earn a living all year round, not just in summer,” said the union.

Jacinto also denounced “an increase in workplace harassment and repression”, aimed particularly at workers who fight for their rights and better pay.

“It is vital to value workers by sharing with them some of the wealth generated and giving them better conditions. Only then can we expect quality tourism,” Tiago Jacinto said.

The Portuguese government has approved the creation of a new visa for seeking work – seemingly giving six-months’ automatic entry to any foreign nationals – while eliminating the quota regime for immigration.

The decision was announced last week by Ana Catarina Mendes, minister for foreign and parliamentary affairs, following the weekly meeting of the Council of Ministers.

She told a press conference held after the meeting that “in the promotion of safe, orderly and regulated migration and in the fight against labour shortages, a new type of visa has been created, specifically the visa for the search of work – thus enabling entry into Portugal for nationals of foreign states who come to look for work for a period of 120 days, extendable for a further 60 days, for a total of 180 days”. 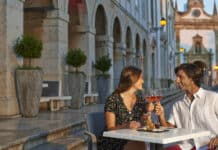