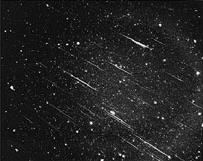 WELCOME TO the November night sky. This is the month when the winter constellations start to appear in the evening night sky and the long dark nights are truly upon us.

Well before midnight, the magnificent constellation of Orion rises in the east, followed by Gemini with its two bright stars, Castor and Pollux. By the middle of November, the planet Saturn can be seen low on the east-northeast horizon by midnight. To help you find this planet, the last quarter Moon is close to it on the night of November 12. Saturn is in the constellation of Leo the Lion and November is the month of the Leonid meteor shower.

On the night of November 17, the Earth orbits and carries through the orbit of a comet called Tempel-Tuttle. This comet has an orbit of 33 years around the Sun and, every time it passes close to the inner part of the Solar System, it leaves behind a trail of small dust particles. It is these particles that cause shooting stars when they enter the Earth’s atmosphere at high speed. With luck and clear dark skies, we may see a meteor a few minutes after midnight on the night of November 17.

During a typical meteor shower, the dust particles burn up 50 miles high in the Earth’s atmosphere. Annually, 3,000 tons of space dust enters the Earth’s atmosphere, but only very occasionally does any of it survive to hit the ground, these are called meteorites and approximately 500 small ones fall every year.

Clive Jackson is the director of the Astronomical Observatory of Tavira (Sitio do Malhão) and the Camera Obscura (next to the Castle in Tavira), specialising in education and public outreach. Tel 281 321 754, Fax 281 324 688. e-mail cdepa@mail.telepac.pt or visit http://www.cdepa.pt