Portugal Resident
Home Society Opinion A giant lynx, a constellation and the academy 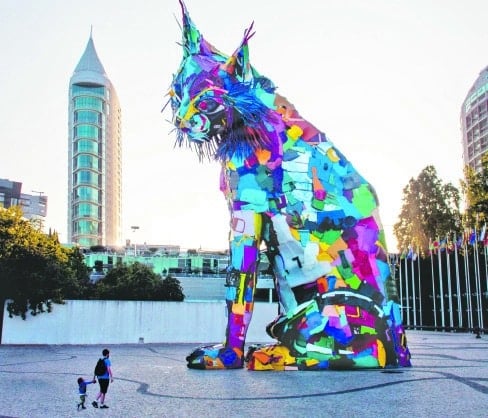 The Iberian Lynx, the Peninsula’s elusive feline. People have been on the lookout for the endangered species for years and now two more have just been released into the Guadiana Valley Natural Park. This comes almost nine months after a giant lynx was spotted in Lisbon, a giant lynx made of trash by the artist Bordalo II which now sits in the middle of Parque das Nações.

Lynxes have a mysterious mythological role, known traditionally as the keepers of secrets. But the origin of the giant lynx at Parque das Nações is no secret. The giant Iberian Lynx installation is part of the artist’s series “Big Trash Animals”, which aim to promote social and ecological awareness. The huge artwork’s purpose is to draw attention towards the world’s waste production and the resulting pollution originated by non-reused materials.

The artwork was placed there to mark the Lisbon+21, a conference that took place last year to discuss the youth’s role in tackling the most pressing economic, social and environmental challenges.

In recent years, due to conservation efforts, the Iberian Lynx is no longer a critically endangered species. In just five years, the number of lynxes in the wild in Portugal has gone from zero to 107 and there are also around 700 in Spain. However, even though they are no longer critically endangered, they are still threatened, along with thousands of other species that are at risk of extinction.

The continued loss of natural habitat, pollution and climate change are the main causes threatening the planet’s species and Artur Bordalo, better known by his artistic name Bordalo II, depicts animals made out of the very materials that are responsible for destroying their habitat.

Bordalo II, nephew of the Portuguese painter Real Bordalo – the first famous Bordalo – studied at the Faculty of Fine Arts in Lisbon, the same faculty where I studied painting for four years.

Although Bordalo never actually graduated, his three years at the Fine Arts Faculty allowed him to experiment with sculpture and various materials which eventually distanced him from his original passion, painting, which was inspired by his grandfather.

That is one of the main advantages of the Faculty. Although the official title of my course was “Painting”, I was encouraged to explore various artistic branches from photography to film, to installation and literature.

The animals in Bordalo’s artworks are his direct way of portraying nature when addressing environmental issues as they move, feel and act in a way capable of moving us to change.

It is not the first time the lynx, as an animal, was used to inspire change in the world. In 1603, an Italian scientist by the name of Federico Cesi founds the Accademia dei Lincei (Academy of Lynxes). Cesi was only 18 years old when he founded the academy and was particularly interested in natural history and botany.

The name Academy of Lynxes was inspired by an illustration of a lynx on the cover of Magia Naturalis, which was accompanied by the words “…with lynx-like eyes, examining those things which manifest themselves, so that having observed them, he may zealously use them”.

The Academy’s aim was to study and understand all the natural sciences and its motto, minima cura si maxima vis, which meant “take care of small things if you want to obtain the greatest results”, can still extend today in our ongoing battle on climate change.

In 1611, Galileo Galilei joined the exclusive Academy and he became its intellectual centre. Because of this honour, he later adopted Galileo Galilei Linceo as his signature.

The giant Iberian Lynx dominated the square as it quietly looked down upon me, its head curiously tilted as I photographed it. To fully grasp its size, just the tips of its paws are made of giant green rubbish bins, as the rest of its body is made up of an array of colourful and vibrant recycled materials.

With such a visible and public space, the artist is trying to create awareness and thus trying to be part of the change that the world needs. Lisbon was already awarded the title of the European Green Capital 2020, not because it is the most sustainable city, but because it has evolved in all environmental parameters over the last decade – energy, water, mobility, waste and biodiversity. Lisbon has a clear position on its role in fighting climate change and intends to continue to evolve, making ambitious commitments and plans.

In 1687, Lynx also became the name of a constellation as Johannes Hevelius, from the kingdom of Poland, gazed upon the starry northern sky. The 19 faint stars that make up the constellation are hard to see which led Johannes to name it after the mysterious feline, challenging others to spot it as only those with the eyesight of the lynx would be able to perceive the constellation.

I am now challenging everyone to make more small conscious and ecological choices as it doesn’t take feline eyesight to perceive the current effects of climate change and, as once defended by the Academy of Lynxes, “take care of small things if you want to obtain the greatest results”.