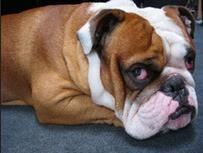 CRUFTS DOG Show is considered a typically British institution, patronised by the best of British dogs. But, this year, something very un-British happened: the Best in Show Supreme Champion accolade went to an Australian Shepherd dog owned by an American. This, of course, must all be the fault of Brussels …

Six years ago, a Pet Travel Scheme known as PETS was introduced in various European countries, and this was extended to the US and Canada at the end of 2002. Its purpose was to enable pets to travel abroad with their owners, without having to endure many months’ quarantine in kennels before and/or after the trip, to ensure they had not developed rabies. It was a complicated procedure, requiring various separate health certificates, but was a sensible start in a process that was much appreciated by pet owners.

It was particularly appreciated in the UK, a nation of pet-lovers. Britons spend more in the shops on pet food than on baby food, and it is no surprise that Crufts was born and bred in the UK.

The EU developed the PETS scheme to produce formal Pet Passports as from July 2004. On the one hand, the original scheme was simplified, removing the need for separate certificates, on the other hand, it was widened to include ferrets, tropical fish, reptiles, birds and invertebrates (except bees and shellfish). The whole concept of the EU was broadened at a stroke – instead of just a common market allowing the freedom of movement of people, goods, capital and services, it would also allow the free movement of certain creatures as well.

There was much argument at the time, as I recall, as to whether ferrets deserved such freedom – such is the breadth of key issues discussed by MEPs. It was primarily thanks to the efforts of a Plaid Cymru MEP that ferrets were finally included – the ferret-fancier lobby must have many votes in Wales.

But, while all this new pet passport legislation did wonders for the peace of mind of pet-owners, it has had unforeseen consequences for shows such as Crufts. As far as their annual competition has been concerned, there were 93 foreign entries back in 2001. This quadrupled to 370 in 2004, and doubled again last year to 723. This year, as many as 920 canine immigrants competed, providing four out of the seven class winners that got to the grand final. A British dog can no longer be guaranteed to win a British show. The demise of Rover is taking on a whole new meaning.