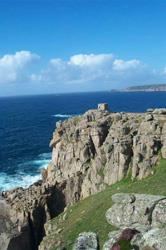 OVER THE years, I have celebrated Christmas in only three countries – England, Portugal and now Cornwall. “What?” you might ask, “Cornwall? But surely that’s an English county?” Well, yes in a way. Although geographically and constitutionally it is the most southwesterly English county, many of its natives would wish it to be, and even consider it, an independent country.

Cornish people, like the Scots, the Welsh and the Irish, regard themselves essentially as Celts, with their own traditions and culture. Devon, its adjoining county, is as English as they come, with rolling green fields, long stretches of sandy beaches and cream teas. Crossing the River Tamar, by either ferry or bridge, is very much like crossing the Guadiana between Vila Real de Santo António and Ayamonte on the Spanish side. You move into a different world, much more hilly, with craggy cliffs and small sandy coves.

My new partner, Maggie, although Scottish by birth, chose to make her home in Cornwall and it was there we spent Christmas.  On Christmas morning, on the pretext of working up an appetite for the roast goose, Christmas pudding and mince pies, which I knew were to follow, I suggested a brisk walk down to the local pub. A few like-minded locals were there and we joined them in a pint or two of the excellent local festive ale. One of the old men sitting at the bar suggested to me that we should return the following day, as we would then be able to view an essential part of a traditional Cornish Christmas. We went home, ate and drank far too much of course, but, being a guest, I couldn’t refuse any of the delights I was offered.

Therefore, the next morning, Boxing Day, I leapt at Maggie’s suggestion that we should take her two dogs out for some exercise. We drove to a local beauty spot, which was obviously a popular meeting point on such occasions. Climbing the hill which had once been the scene of a tin mine – once one of Cornwall’s leading, but now almost defunct, industries – we reached the top where dozens of families, and their assorted dogs, were all chattering away to each other. The view was spectacular – the sea on one side and tiny villages, nestling in the hillsides, on the other. We gave the dogs a good run, bundled them back in the car and drove back to the village where the local pub had once more opened its doors.

Today, it was much more crowded and the customers were already, it seemed, full of good cheer. As in Portugal, although not in England, children were allowed in the bar, making it much more a family affair. I noticed that many of the people there were carrying musical instruments – piano accordions, a flute, a violin, a set of bagpipes – and they congregated together on one side of the bar. After a while, someone broke into song and, in a couple of minutes, everyone was joining in with their instruments and singing traditional Cornish folk songs, as the children got to their feet and danced a jig while the music played.

One by one, the men and women stepped forward with a solo offering, later joined by the full ensemble to shouts of “Oggi, Oggi”, a traditional Cornish chant, of which no one seemed to be able to tell me the origin. After a couple of hours, with our ears still ringing, we made our way home for lunch, a traditional Scottish game pie of venison, pheasant and wild pigeon, made by Maggie. We later packed up our presents, loaded them into the car, ready for the return to Plymouth … and reality.

One of the presents I had hoped to buy – or receive – this year, but discovered it was not yet available, was a particular book. It had been reported in the press that poems written by the famous Hollywood actress Marlene Dietrich, a great favourite of mine, had been discovered by her daughter Maria in an attic.

It seems that Marlene, who died in 1992, spent her last years as a reclusive insomniac in Paris. There, she put her sleepless nights to good use – writing poetry. Maria tells us she recently found the poems in a battered leather suitcase and decided to edit and publish them. She felt this would put the record straight and show that her mother did not retreat from the public gaze because of vanity, having lost her legendary good looks. “My mother withdrew,” Maria says, “because she was simply tired of the endless effort to present an ideal of perfection, even though she was not perfect.”

In the poems, Marlene addresses a parade of Hollywood directors, actors, novelists and singers. To Ernest Hemingway she wrote: “Losing you / Feels like a fisherman feels / Who loses his catch he thought he had / Hooked / While piercing / The gills of his prey.” To Noel Coward: “No more body / To hold on to / While you sleep / Just the sheet / What a cheat.” To Ronald Reagan, whom she met in Hollywood but was never a close friend: “A tense silence / Grips me, surrounds me / Grounds me to the messy floor / Around me / No voice, no wind, no rain / Just silence will remain / Around me / What a fate / ‘Too late,’ cried the raven, ‘too late’”

These, of course, may not be the greatest lines ever written, but they show a little of the character of the writer, such as this mocking comment on the Oscars ceremonies: “With Henry Fonda / I wonda / How you got away / With this sordid / Morbid bit.” And, finally, to the dead Orson Wells, another of her great admirers: “Even when you are dead / You are not safe / Not out of reach.” Maria Riva’s book is available, I understand, in Germany, but not yet elsewhere. I await it with interest.