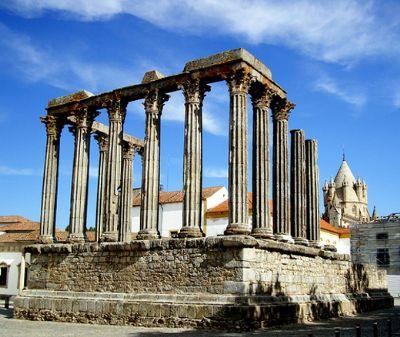 In this travel feature, Paulo Silvestre takes readers on a guided tour of the best places to visit in Portugal. Paulo provides inside information and useful tips to assist you in planning relaxing trips and enjoyable days out. You’ll discover the best of Portugal and enjoy celebrating its unique culture! Paulo holds a degree in Media Studies and his hobbies include playing in a band.

Évora is one of the more pleasant cities of  the Alentejo. It has a large number of delightfully preserved monuments and buildings, protected by UNESCO as a World Heritage Site.

The city’s most famous feature is the second or third century ruins of a roman temple called Templo de Diana. Built in Corinthian style, it has six columns in front (Roman hexastyle) and a total of 14 granite columns remaining. The intact columns are 7.68m high.

In the central area of the city, there is only short term parking accessible for non residents. The best thing to do is to leave the car on one of the large parking lots on the ring road which runs next to the town wall. From there it is only a few minutes’ walk to the centre.

A good starting point for your tour of the city is the Giraldo square. Following that, walk up to the Évora Cathedral, Sé Catedral, one of the most famous gothic monuments of Portugal with an outstanding main portal featuring statues of the Apostles (around 1335).

The next place to visit is Capela dos Ossos, built in the 15th century, at the Church of São Francisco. It holds the bones of around 5,000 people with an entrance sign reading, “We bones that are here await yours”.

Renaissance fountain, Fonte das Portas de Moura, built in renaissance style, has the contour of a globe surrounded by water, an allusion to the Age of Discovery.

Palácio D. Manuel was where Vasco da Gama, the great Portuguese explorer, lived between 1519 and 1524, the dates corresponding to his nomination as the Count of Vidigueira and Viceroy of India.

Igreja dos Lóios, built in the 15th century, was the pantheon of the kings and contains a number of tombs, with a Manueline chapterhouse and its magnificent portal. The church interior is covered in azulejos (ceramic tiles).

S. Brás Chapel is a good example of Mudéjar-Gothic with cylindrical buttresses. The Chapel is exclusively open for prayer.

University of Évora, formerly a Jesuit college, was erected by Cardinal-King Henrique in 1559; it includes the 16th century Mannerist church and the academic buildings surrounding the large 17th-18th century cloister.

Near the city there is an 18 kilometre aqueduct built in 1532 to supply water to the city’s inhabitants. Close by stands the Convento da Cartuxa, a 16th century monastery, which is still occupied by seven monks.

With its walls of the Roman, Moorish and later periods still well preserved, and its narrow paths, at times lined with arcades, Évora still has a Moorish and medieval look, and therefore its entitlement to the term ‘cidade museu’, museum city.

Get there and explore!

Paulo can be contacted by emailing paulo.silvestre@algarveresident.com