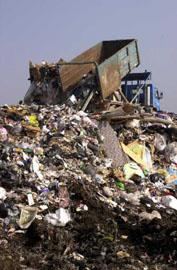 THE AMOUNT of waste produced each year in Europe is equivalent to half a tonne per head of population.

Throughout the EU as a whole, less than a third is currently recycled. In England, the figure is less than a quarter and has one of the worst recycling rates of all EU Member States. The UK has much to learn.

Part of the problem in the UK, is that it has always found it much easier to dump rubbish into holes in the ground. As recently as 10 years ago, the UK was still sending 85 per cent of all municipal waste into landfill, over 20 million tonnes of it every year. But, in April 1999, the UK signed up to an EU Landfill Directive, which committed all countries to reduce landfilled waste significantly within an agreed timetable. Since then, it has been struggling to cope.

Some argue that landfill should not be a European issue: what business is it of Brussels to determine where and how we disposed of our own waste? But agreement is now widespread among national governments that we need common rules to face a common problem, if only for one reason: 32 per cent of all methane released into the atmosphere from the EU is emitted from rubbish decomposing in landfills. Methane has a greater contribution to global warming than carbon dioxide.

The European Parliament has taken an increasingly leading role in setting out what course to follow. At the last session in Strasbourg, Dr Caroline Jackson, a South West region MEP and former chairman of the Parliament’s Environment Committee, successfully piloted through a far-reaching report making detailed changes to a proposed EU Waste Framework Directive.

It defines the need for waste prevention . It also defines best practice for waste recycling. Finally, it lays down clear definitions and targets for waste recovery, particularly conversion into energy via incineration. The value of waste as a home-grown potential energy source is growing in importance given our need to reduce our dependence on sources elsewhere.

In Denmark, over half of all municipal waste is already incinerated, compared with just eight per cent in the UK. Modern incinerators produce almost no emissions. The trick is to have many small ones, near to the sources of the waste, to minimise lorry movements, rather than the massive monuments now being considered by the UK government.

Small is beautiful – and waste disposal is now a burning issue.