Portugal Resident
Home Original A bit o’North in it! 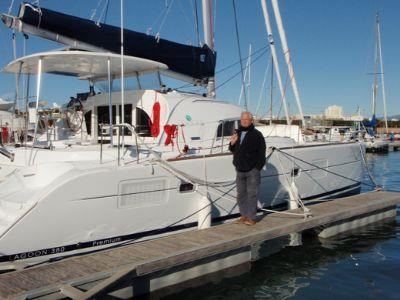 Marian Burbage came to the Algarve three years ago to support her partner Roger in the boating industry with South West Charters. She is a fluent Welsh speaker and is now busy trying to crack the Portuguese language.

Following our great combined Competent Crew/Day Skipper RYA Practical Course, we did actually meet up again as a group nine months later with our ideas for our next project.

To cut a long story short, it was Bob and Sue’s proposal that got all our votes. They had bought a second hand Beneteau First 375 and needed to sail it from Lagos to South Wales. The best time for us to go was early May, supposedly before the Nortada (North wind) set in. Sadly, George was unable to join us due to his shore based theory courses commitment. On his recommendation, however, we were able to secure the services of Roger – a hugely experienced Yachtmaster Instructor and examiner.

This delivery was to be a first long distance trip for Bob, Sue and myself; Tom of course figured he had done thousands of sea miles but we reckoned his mathematical skills fell short!

We set off from Lagos on a bright and breezy morning, fully stocked with food and adrenalin. We started well with excellent sailing around Ponta da Piedade, past beautiful beaches and rocky coves along to the impressive Cape St Vincent, the most south westerly in Europe. Once we rounded the point,, however the sea became very choppy and the wind right on the nose which made for very uncomfortable sailing. After three hours of the same, Roger decided to return around the corner of the Cape and shelter under the cliffs at Sagres until the conditions became more favourable. We were reminded afresh that the wind and seas do not always allow you to do just as you want on a boat.

After our initial disappointment we spent a lovely late afternoon basking on deck in calm waters and also managing to catch lots of mackerel with a make shift line. We rowed ashore in the dinghy for an evening drink and apart from getting rather wet after trying to get out of the dinghy too quickly we had good fun.

The next day, the wind had gone into the North West and although we were close hauled, we made good time and the seas had eased. The next 24 hours were relatively uneventful but enjoyable and every day the wind had “a little bit o’ North in it” testing to the full our sail setting skills. Our next port of call for fuel was the Belém Marina in Lisbon. What a fantastic experience sailing up the river Tagus, in the midst of a flotilla of different varieties of craft, all heading for the beautiful city of Lisbon.

With the impressive statues and architecture along the banks of the river, it was a sight that impressed itself in my memory for all time. The marina itself was very upmarket and was graced with the presence of many attractive Italian ‘studs’ who were supporting the Italian team for the Formula 1 Power Boat World Championships that were due to be held there. We made a brief foray into the city and promised ourselves to go back one day to appreciate it at leisure.

On leaving Lisbon the next day, the boat did not seem to be moving so well and much to Roger’s annoyance (we think he was looking for a delivery in record time) we had to make for the safety of Peniche marina. We tied up alongside the wall on a slip and Tom again, wishing to display his varied skills, quickly stripped to his shorts and dived under the boat to investigate. After a couple of attempts, he came up spluttering with a four metre long rope that had been tangled around the prop. Fortunately, there was no damage to the boat and we kept the rope as our first trophy. By this time the tide had gone out so we had the hardship of having to test out the local bars and cafes until there was sufficient water for us to float off the slip again.

The next couple of days were a mixture of close hauled sailing and some motoring. The coastline past Nazaré, Figueira and Porto were rather boring from the sea, however the sight of dolphins playing around the boat each morning and most nights, giving us a phosphorescence show all to ourselves, made the experience delightful. We made a quick fuel stop at Leixões above Porto, a rather smelly marina with lots of large shipping. We enjoyed watching a large container ship being piloted into the fuelling berth – it made our concerns about berthing our boat seem trivial! Two and a half days later, we made our way into Bayona on the Spanish-Portuguese border, arriving at two in the morning. Not an experience for the faint hearted. There are several small islands on the approach to the harbour, normally well buoyed and with good leading lights. Unfortunately on our passage, some of these were out of action, so we all had to keep our eyes peeled. This was also our first experience of berthing stern to.

I fell in love with Bayona and decided if ever I was to marry again it would have to be there! It has its place in history as Columbus’ first mainland landfall in 1493 after returning from the New World.  The marina is overlooked by an imposing Parador that is surrounded by the medieval walls. Several days on board in close quarters with other people is good fun but it was also good to go off on our own for a few hours and just chill. This was to be our last port of call before crossing Biscay, so we rested for two nights and vittled (put the food on!) the boat. How did the feared crossing progress and did we do it in one hit? Find out next time.