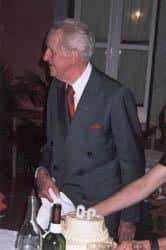 TO CELEBRATE the 90th birthday of Canon John Humphreys, one of the most prominent members of the British community in Portugal, 75 of his friends gathered together and treated him to a dinner at Cascais Cultural Centre, on September 27.

As an additional surprise, the Canon’s distinguished brother, Emyr Humphreys, an author and poet and Fellow of the Royal Society of Literature, was invited and travelled from Anglesey, North Wales, U.K. with his daughter Mair to join the party.

David Evans Jr, whose father Dai had been the Chaplain’s Warden at St Paul’s, spoke of their close collaboration for 15 years, culminating in the construction of the new and modern church in Estoril. Father Vitor Melícias, President of the União de Misericórdias Portuguesas and High Commissioner for the Free and Democratic Republic of East Timor, also spoke. He and Canon John have been close friends for 15 years.

Canon Humphreys has been resident in Portugal since 1957, when he was appointed Chaplain of St Paul’s Church (then a separate entity from St George’s Church in Lisbon), a post he held until his retirement in 1980. He was the driving force behind the construction of the new church building in Estoril and has been actively involved in many other community activities: The British Community Council (life member), The Royal British Club (honorary member), the St. Julian’s School Association (life member), the St. David’s Society (past chairman) and the British Historical Society, to name but a few.

In addition, Canon Humphreys has, over the past 25 years, undertaken considerable research on overseas property on behalf of HM Government and, in particular, the moveable and immovable property in the Estrela district of Lisbon. His research was placed at the disposal of Dr. Robert Howes of King’s College, London, who, in 2004, produced A History of the Estrela Site in Lisbon, from the 17th Century to the 1950s for the Foreign Office.

In 1977, Canon Humphreys was awarded an OBE for services to the community in Portugal and, in 1994, the then President of the Republic, Dr. Mário Soares, invested him as a “Comendador” of the Portuguese Order of Merit.