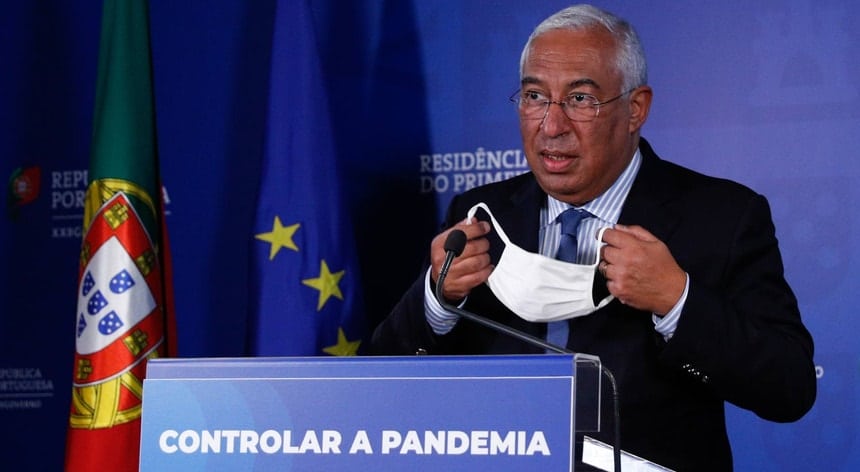 7.1 million Portuguese – 70% of the population – are to be saddled with new restrictions from Wednesday in the government’s bid to stem the rising tide of Covid infections.

The extraordinary meeting of the Council of Ministers announced its plans for the way forwards this evening as prime minister António Costa has arranged to meet with President Marcelo on Monday with a view to the latter declaring a State of Emergency for areas where the level of infections has exceeded 240 people per 100,000 over the last 14 days.

President Marcelo has made it clear that he wants political and social consensus before any kind of declaration –  thus Monday will also see him meeting with representatives of the other  political parties (PCP communists, Bloco de Esquerda, PSD, CDS-PP, PEV, PAN, Chega, Iniciativa Liberal).

For now, the picture coming out of today’s deliberations is of a country in which 121 boroughs (only one of them – São Brás de Alportel – in the Algarve) will be under much tougher restrictions from November 4.

After that, the number of boroughs affected by the decisions could change.

Explain reports, “boroughs of greatest risk will be identified every two weeks”.

In other words, if more boroughs start registering high levels of infection, they too will be included in the new measures. These have been listed as:

Said the prime minister this afternoon: “We have a sanitary crisis, a health problem and we cannot solve it through the multiplication of cases for the police. The police have a fundamental role in guaranteeing order, guaranteeing that people comply with obligations, and helping to protect society as a whole. This is not a moment in which we should be going out fining people, because fining is actually the last thing we want to do”.

This was clearly aimed at trying to bring left-wing parties ‘onboard’, after they said almost in unison on Friday that they couldn’t see the reason for a State of Emergency.

Mr Costa also referred to the two-week ‘December lockdown’ that was being trailed in the press over the last 24-hours – stressing that this would be thinking too far ahead.

“We have to concentrate on what needs doing immediately”, he said.

Thus for now, the 121 boroughs have been warned, and will need to be prepared.

As for the rest of the country, the State of Calamity status quo continues once the long-weekend ‘confinement to boroughs of residence’ comes to an end on November 3. (For those who need reminding, State of Calamity ‘rules’ are: maintain physical distancing where possible, the use of a mask in closed public spaces and busy streets, compliance with respiratory etiquette – sneezing or coughing into one’s elbow – frequent hand washing and the ‘use the StayAway Covid app’. This last requirement has actually been ‘sneaked in’ as a rule. It is still technically not enforceable).