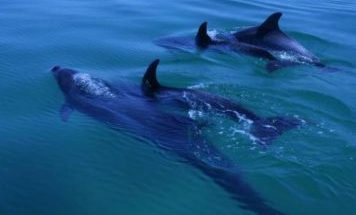 A 5th dolphin has been found dead following controversial dredging that continues to blight the Sado estuary despite a draft resolution passed by MPs before Christmas calling for immediate suspension of the work (click here).

The dolphin carcass, photographed by SOS Animal, has appeared in a short clip on national television highlighting what the NGO calls the “devastating effects that dredging works are having on the local ecosystem”.

These effects were always expected (click here) – hence the fury of local people desperate to stop the destruction before it’s too late.

In a post over social media, SOS Animal appeals to parliamentary groups to pressure “competent entities and municipalities”, “recommending that these issues of national interest are made public”.

Other likely victims of the dredging – pushed forwards by PS Socialists in the name of ‘opening up the Sado to much larger tourist boats’ – are seagulls, which SOS Animal has found either dead or dying at various points of the estuary.

The worst aspect of this story is that court bids by SOS Sado to stop the dredging are still ‘under consideration’, but no action has been authorised to stop the work pro tem.