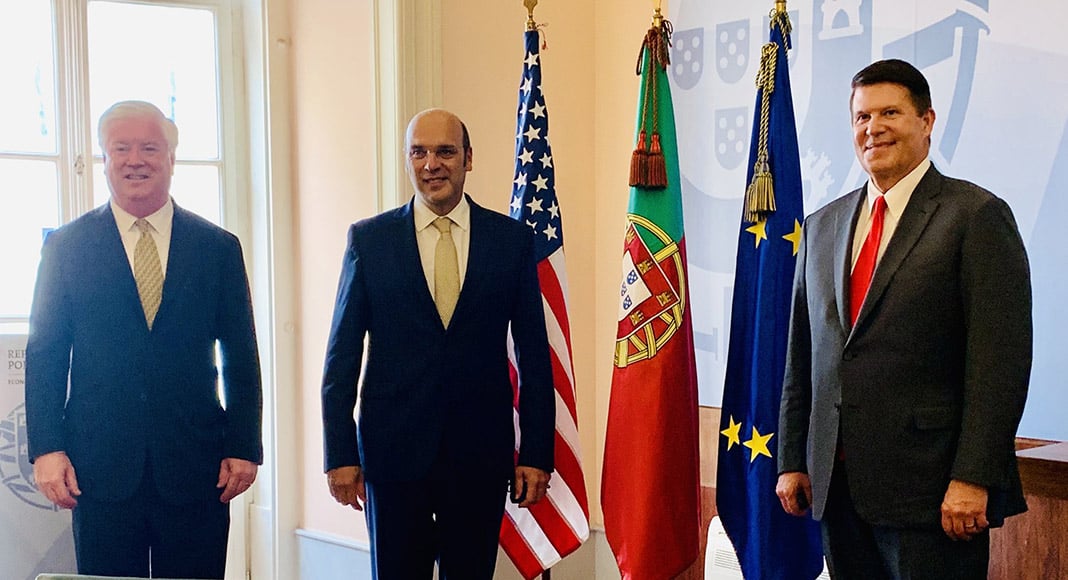 But while the US ambassador was criticised last weekend for being ‘less than diplomatic’ in his approach to Portugal (click here), Mr Krach seems to have come through with flying colours.

The smiles posted over Twitter seemed to say it all – along with the message from Mr Krach that it was “good to learn more about Portugal’s economic objectives from Pedro Siza Vieira” (Portugal’s own economy minister).

With Spain next on his list, Mr Krach is seemingly doing a sterling job getting Europe in line with American thinking.

He told Lusa that 20 out of 30 NATO countries are now on board with what the US calls its ‘clean network’ (5G without Huawei); the inference being ‘only 10 more now to go’.

Yesterday’s talks with Siza Vieira and infrastructures minister Pedro Nuno Santos (who only the day before had stressed how ‘anxious’ Portugal is for American investment) did not include meetings with any of the major telecoms companies.

But Mr Krach had a no-nonsense message for them too – on the basis that up till now the understanding has been that they ‘could’ still countenance limited involvement of Huawei technology (click here): “European telecoms boards must decide on 5G suppliers”, he tweeted. “If they choose a high-risk 5G supplier board members will be liable when something goes wrong”.

Mr Krach is a former Silicon Valley mogul. In other words he’s speaking from specialist knowledge when he suggests nothing could go right if Huawei gets its foot in the door.

“If you think about the 5G system it’s like a string of pearls – as strong as its weakest link”, he told reporters. Therefore not having Huawei in the core of the network but allowing it into other aspects “corrupts the whole system”.

It was at this point that Mr Krach described 5G as “the backbone of the Chinese Communist Party’s surveillance”, saying he was “very happy to see” that the governments and CEOs he has been talking to on this European tour (Portugal included) “understand that the Chinese Communist Party is a real and urgent threat to democracies throughout the world”.

This message now rammed home again and again over the last couple of years, it was time for the lighter side to the day’s talks where Mr Krach responded that as far as he was aware there was every chance of US investment in Portugal ‘in the short-term’.

“Portugal has been a great partner, friend and ally (of the US)” and as a former global CEO, Mr Krach said “I have done great business in the country. It is easy to do business with Portugal”.