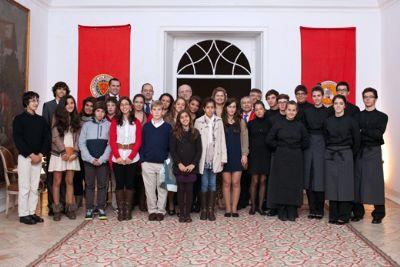 The Chaîne des Rôtisseurs will be celebrating their 40th anniversary in Portugal in style between October 3 and 9, with a series of events involving the best restaurants in the country and a gala dinner at the Ritz in Lisbon on October 6.

The celebrations will be followed by a three-day tour of the Douro region for the many members of the Chaîne who will be joining the Portuguese group from as far as the USA, China and even Australia.

The programme includes a visit to Évora, where last year the Portuguese Chaîne launched a gastronomy school for teenagers from needy families. Here they can learn the bases of restaurant and hotel business.

The school is entirely supported and sponsored by both the Portuguese and the International Chaîne and proceeds from the Chapitre and the raffle at the gala dinner will contribute to the education of the 50 pupils.

These events, like all organised by the Chaîne des Rôtisseurs, are open to non-members by invitation. Should you be interested to learn more about the Chaîne, please contact the Bailli Provincial: