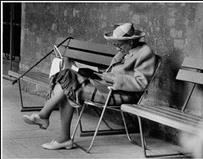 A TOTAL of around 34,000 old people are living alone in Lisbon, a little known situation which seems to be most common in the parishes of Santa Maria dos Olivais and São Domingos de Benfica.

In an interview given on International Day of the Aged, commemorated on October 2, Lipari Pinto, councillor for social action at Lisbon Câmara, revealed that a total of 133,304 old folk are living in the capital, which corresponds to 23 per cent of the overall population of Portugal. The statistic makes Lisbon the ‘oldest’ city in Portugal and the ninth oldest in Europe.

Despite the number of old folk in Lisbon being high, Lipari Pinto considers it to be more “worrying” that so many of that number are living alone. He considers fighting isolation a main priority.

“The greatest number of old folk living by themselves can be found in the parishes of Santa Maria dos Olivais and São Domingos de Benfica, but it seems that the Junta de Freguesia presidents and the residents in these areas are not aware of this. It is something we must change,” the councillor emphasised.

In order to combat isolation among old people, Lisbon signed up to the social services programme Rede Social (social network), created in 1997, which has already been implemented in 275 boroughs throughout Portugal. Rede Social aims to guarantee greater efficiency in terms of responding to social needs.